Minority Rights Group > News > Minorities > Amazigh > The Amazigh language: between the risk of extinction and the hope of victory

The Amazigh language: between the risk of extinction and the hope of victory 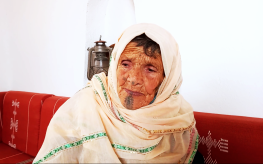 ‘The Amazigh language… between the risk of extinction and the hope of victory’ is a video documentary by Mariam Ben Aissa, a Tunisian journalist, who takes us to the south-east of Tunisia, 50 km from the governorate of Gabes, to the village of Tamazret. There lives one of the last large communities still speaking the Amazigh language in Tunisia, a language classified by UNESCO as being in danger of extinction.

Mariam describes the threats to Amazigh culture in Tunisia through the voices of four village residents, who explain the importance of transmitting and teaching the Amazigh language to safeguard this indigenous culture.

Shilha is a Tamazight dialect mainly spoken in Tunisia. After centuries of assimilation, many Tunisians continue to identify themselves as ethnically and culturally Amazigh despite not speaking the language. Through her video reportage, Mariam Ben Aissa explains how this fact contributes to a significant proportion of the country’s population identifying as Amazigh. In some cities and towns such as Sened, however, there are no official figures defining the proportion of Amazighs in the population. Most Amazigh families no longer speak Shilha, the dominant Tamazight dialect in Tunisia. Based on the surname as an indicator of the origins of the individuals, it seems nevertheless likely that the vast majority of the population has Amazigh roots.

For several years, Minority Rights Group has joined the efforts of local associations in their advocacy for the recognition and enforcement of the rights of Amazigh communities. In June 2021, in partnership with the Network of Anti-Discrimination Points Tunisia, we submitted an alternative report to the UN Committee on the Rights of the Child.

This report recommends adopting a new strategy to stop the process of cultural assimilation and language endangerment caused by state policies and to recognise the country’s diversity in school curricula and in public discourse. It is necessary, for example, to inform all municipalities of the abolition of Circular No. 85 of 1965, which banned non-Arabic first names, so that Amazigh parents can register their children with traditional indigenous names. And to preserve the language, it would be essential to support the teaching and revitalisation of the Tamazight language to enable Amazigh children to retain their linguistic and cultural identity.

In the spirit of resisting the dominant discourse by giving voice to minority groups that are otherwise rendered silent by the mass media, this report is part of our online training for journalists covering Tunisia on the theme of ‘Non-discrimination and diversity in the media’. The training, which ran from February to March this year, aimed to provide journalists with the tools and resources to bring the voices and experiences of minorities in Tunisia to the media. This report won the first prize among the videos selected following the training.