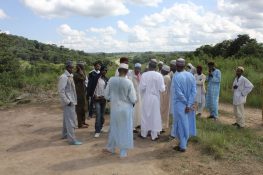 ‘Network for Peace‘ is a three-year project addressing deadly inter-community violence, conflicts between the two main livelihoods of farming and cattle raising, identity conflicts, limited community capacity, marginalisation and low levels of trust between communities in Cameroon, Kenya and Uganda. The central point of the project is using an early warning mechanism (EWM) in resolving conflicts. Since the commencement of the project in October 2019, the project has so far involved 18,488 people, and we have seen positive behaviour change in targeted groups and improved response to conflict in fragile and conflict-affected areas as a result of our interventions.

According to one of the Rendille community members we talked to (Rose Ngoilel Orguba) from Marsabit in Kenya, her family is a microcosm of other pastoralist households, with the same predicaments that they all face and all the effort that has to go into ending all form of violence. As she speaks, the memories of these sad events do not seem to have faded. As she says, ‘We have been losing many people to violence. We lose children, spouses and brothers.’

Like other community members in the project locations, Rose is actively involved in Network for Peace project activities supported by MRG. She is a peace ambassador trained in conflict prevention and peace building – an opportunity she says she utilises for the good of her community. According to Rose, the project is literally re-inventing the wheel for good, and peace will now be born. That is what she says of the good work MRG is doing in Marsabit, through community sensitisation on conflict prevention and peace building, and the use of an EWM to report insecurity alerts and warnings, which will also be utilised during the 2022 general election in Kenya. Previously, community members could not report any incident or give information on planned attacks to the authorities, due to fear for their safety within the community and intimidation by the security forces; with a digital early warning system, they can now report an incident without revealing their identity. This is something that gives confidence to community members who are tired of conflicts and insecurity within the area. It is through the Network for Peace project that both former and current leaders in Laikipia, Marsabit were brought together to forge unity and peace for the local communities. They were able to reconcile and put their differences aside to unite their communities. Through the development of EWMs in the three countries, community members can report indicators that trigger conflicts in order to prevent them. This has also helped them recover many livestock animals like goats and cows that were being stolen.

In Busunga, Rwenzori sub region, west of Uganda, community coordination and digital EWMs are solving decades-old problems. This technology allows local populations to take measures against the destruction of their crops by elephant herds and other animals from the nearby national park. For years, the farmers living on the long stretch of land bordering the Queen Elizabeth National Park in Uganda’s Kasese district have suffered the repeated invasions of elephants. Although several efforts had been put in place by the Basongora and other local communities, including sounding jerry-cans to scare away the elephants at night as the animals approached their gardens and installing beehives as a deterrence mechanism, none had yielded results. With the introduction of EWMs, when a herd of elephants stormed Busunga village in October last year, before they entered local people’s gardens, a peace ambassador, James Kainamura, sent an SMS through the EWM: ‘Elephants have stormed our village and are about to destroy the crops’. The system administrator responded by sharing James’ mobile phone contact with the wildlife warden, who immediately sent a specialised team to chase away the elephants, so that people’s gardens were spared. James’ quick reaction saved entire gardens of maize and other plantations in Busunga from destruction by the elephants. ‘Thanks to the Donor and thanks to partners who came up with the digital EWM innovation,’ said Busunga community members. The project is greatly improving the lives of the ethnic minorities in the project locations.

During the period of November 2020 and February 2021, tensions arose between students belonging to the pastoralist Mbororo community and those of settled farmers at the Government Technical School (GTS) of Sabga, North West Region, Cameroon, as a result of a violent dispute between a Mbororo and a non-Mbororo student. The situation aggravated silently to the extent that pastoralists’ children were coming to school with knives, while farmers’ children came along with razor blades and machetes. Due to the confidential reporting and effective use of the EWM, the potential conflict could be identified, resolved and prevented before it turned violent. The local community field monitors were able to report through the peace ambassadors operating in the region. The peace ambassadors connected with the school authorities and parents and organised a sensitisation meeting whereby they were given a chance to talk about the situation. After sharing the story, representatives from the two ethnicities saw the risk and potential problem arising and jointly came out with an agreement and plan for uniting the students. A meeting was organised with the school authorities and students to discuss the issue, and they were able to resolve the conflict. Students no longer come to school with machetes, knives and razor blades, and both sides can attend the school harmoniously.

Photo: A Minority Voices training for members of the Mbororo community, Cameroon, June 2013.