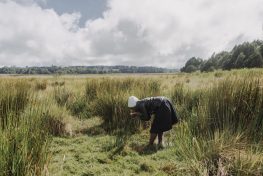 Indigenous peoples make up less than 5 per cent of the global population but have safeguarded 80 per cent of the world’s biodiversity. These global environmental custodians have faced land seizures over the last two centuries as ‘formal’ legal systems are made to trump their customary ownership.

Outrageously, they remain prone to evictions even today in the name of the environment.

The UN’s new ’30×30 conservation goal’ – aiming to ‘protect’ 30 per cent of global lands and oceans by 2030 may seem a logical response to the climate crisis. However, the plan relies on making the richest biodiverse regions devoid of all human habitation. This would pave the way for the mass evictions of indigenous communities, the planet’s most reliable biodiversity custodians, depriving them of their livelihoods and cultures, with no evidence that it will mitigate climate change.

This initiative will prove counterproductive as evidenced in the many places where indigenous peoples have already been displaced. While these evictions have often been in the name of conservation, they have in fact failed to stem environmental degradation. Instead, tracts of land get placed in the hands of vested interests who, in the name of development and economic growth, feel entitled to exploit it for logging and mining, with no international safeguards able to prevent this.

Indigenous peoples have an innate relationship with the biodiversity around them. Indigenous communities draw on their customs and traditions to harness, monitor and care for their lands. Removing them is counterproductive and foolhardy. Rather, it will empower profiteers and deprive traditional communities.

Recognising indigenous ancestral domains and equipping indigenous communities for the frontline in the fight against environmental degradation is the only way forward. In advance of the UN Biodiversity Conference in Kunming, China in October 2021 we request you to stand with indigenous peoples and sign our petition insisting that governments recognise indigenous ancestral domains as crucial to mitigating climate disaster. Play your role in protecting the world’s environment by ensuring that those with the know-how can continue to be the planet’s foremost custodians.

We the undersigned call on all UN member states to amend the text of the New Global Framework for Managing Nature through 2030. The Framework should uphold indigenous peoples’ right to their ancestral lands, and it should recognise their central role in maintaining biodiversity on their territories. The Framework should also ensure the meaningful participation of representatives of indigenous peoples at any meetings that are convened to decide upon, monitor and follow up on the implementation of the Framework.

Interested in reading more? Take a look at these articles: