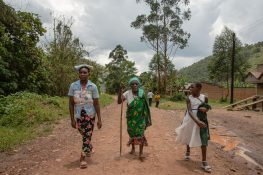 Minority Rights Group International (MRG) welcomes the recent decision of Uganda’s constitutional court, directing a lower court to determine appropriate compensation for the Batwa community for their irregular eviction from ancestral lands in the southwest of the country.

The constitutional court determined that between the 1930s and 1990s, Batwa were, without prior consent, evicted by government authorities from their ancestral lands in Kabale, Kanungu and Kisoro districts to free land for wildlife and forest conservation. These areas have now been turned into the Bwindi Impenetrable National Park, Mgahinga Gorilla National Park, and Echuya Central Forest Reserve.

‘Land is central to the social, economic and political development of a society. Loss of this in part has impoverished the Batwa and is a reason for the continued unequal development experienced to date. In principle, the government must resettle them,’ said Agnes Kabajuni, Managing Director of Minority Rights Group Africa.

In 2013, the United Organisation for the Batwa Development and eleven individuals petitioned court on the plight of the Batwa.

‘As a result and pursuant to Article 32(1) of the Constitution, it is necessary that appropriate affirmative action measures be taken in favour of the Batwa to ameliorate the appalling situation in which they find themselves in,’ Elizabeth Musoke noted in the lead judgment, according to the New Vision newspaper.

One of the petitioners, Alice Nyamihanda, a Mutwa human rights activist, says it is high time that her community, the Batwa, receive compensation for the abuses and discrimination meted out against them dating back to colonial Uganda.

‘We were forcibly evicted from our ancestral lands, without compensation. This has had a profound impact on my community. The ruling by the constitutional court is a positive step in our ultimate aim of getting compensation as the Batwa,’ she says.

Batwa people are a historically marginalised indigenous community in Uganda. Their eviction from ancestral lands has relegated them to the fringes of society in many parts of southwestern Uganda. The community faces discrimination and exploitation from larger ethnic groups they live amongst. Batwa, often treated as an afterthought in public policy and decision making, also face significant challenges in accessing public goods and services. A recent MRG study found that they struggle to access equal and quality education and healthcare.

Photo: Baleku Flora (centre) was born in the forest and left with her parents when the Ugandan government started setting aside the forest for mountain gorillas. She later went back to live on the outskirts of the forest with her husband who died before the government forced all Batwa out of the forest in 1991. With her family, she now lives in Buhoma, a village bordering the Bwindi National Park. Credit: Esther Ruth Mbabazi.