Indigenous paralegals and the fight for climate justice 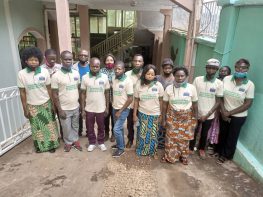 For indigenous communities, climate justice is not simply about access to land. It is about the recognition of the ties between peoples, their land and their ancestral way of life. Land, territories and natural resources not only constitute the basis of their spiritual, social and cultural identity but are central to the possibility of indigenous peoples determining their development and self-determination.

For indigenous peoples, land is not just land. Ownership, use, control over and the management of land, all directly affect the enjoyment of a wide range of other socio-cultural and economic rights.

From the colonial period to present-day African regimes, indigenous peoples in Africa have been kicked out of their ancestral lands in the name of conservation, ultimately robbing their lands and the natural resources therein. Control over the allocation of land rights has historically and continues to be used as an instrument of oppression and marginalisation. There is an inextricable link between the collective land rights of indigenous peoples and their rights to self-determination, self-driven development, and equitable access to services.

In the backdrop of this picture, there is a group that is often overlooked but has a crucial role to play in the quest for climate justice: paralegals. Community-based paralegals have been at the forefront and are a critical pillar in advocating for a new social contract for indigenous communities.  Their work, alongside indigenous communities, combats decades of marginalisation and exclusion and is premised on their rights to self-determination, self-driven development and equitable access to services.

Over the years, Minority Rights Group has helped build and continues to support robust paralegal networks in six countries in Sub-Saharan Africa: Kenya, Uganda, Tanzania, Rwanda, Cameroon, and the Democratic Republic of Congo, with the goal of supporting communities through legal empowerment, knowledge and expertise transfer. Throughout these activities, our most important focus (in my opinion) is on answering this key question:

How do we ensure that indigenous communities, who continue to disproportionately bear the brunt of climate change and lose their ancestral lands in the name of environmental conservation, are heard?

A case in point: the Batwa of the Great Lakes

The human rights situation of indigenous peoples in the Great Lakes region remains extremely serious. The community-based paralegals within the region help to ensure that the advocacy to secure indigenous land rights is being led by indigenous peoples themselves. Their work complements the key role that their communities play in environmental conservation. It is through their efforts that indigenous participation in the discourse around climate justice will be achieved.

Indigenous Batwa, a forest hunter-gatherer people spread throughout Burundi, Rwanda, Uganda, and The Democratic Republic of the Congo (DRC), continue to fight for recognition and against the inequality that has steadily ravaged their society over the years.

Traditionally, Batwa were deeply rooted in the forests of the Great Lakes region from where they derived their identity, cultural rites and traditions as well as their source of livelihood and medicines. The nineteenth century saw a rise in deforestation, not only through the clearing of forests by incoming agriculturalists and pastoralists but also the advent of colonialism characterised by large-scale logging, an increased interest in trophy game hunting and the creation of reserves on indigenous peoples’ lands. Further compounded by the establishment of newly protected areas all over the country in the name of conservation, entire communities across the region were forcibly removed from their ancestral homes with no recourse whatsoever.

Batwa paralegals across the entire region have been key in pushing and advocating for their communities. The paralegals in the DRC have been instrumental in advocating for their rights for the community affected by the establishment of the Prince Kahuzi Biega National Park at both national and regional levels with a case currently before the African Commission on Human and People’s Rights.

For Batwa in Southwestern Uganda, the story is no different. They live in districts of Bundibugyo, Rukungiri, Kisoro and Kabale. Records show that from as early as the 1930s to the late 1990s, the Batwa community were systematically evicted from areas of Kabale and Kisoro that form part of present-day Echuya Forest Reserve, Mgahinga Gorilla National Park, Semliki Park and Bwindi Impenetrable National Park without their free, prior and informed consent. These evictions totally disregarded the community’s rights to land, property, health, education, culture and a satisfactory environment that is favourable to their development. As a result, most Batwa were left landless and impoverished; to survive, they resorted to begging and life as casual labourers on other people’s land. The denial of the Batwa community’s land rights has resulted in the community lagging behind in terms of education, infrastructure, health, education and social services.

The paralegals in the community have been instrumental in advocating for the community’s right to socio-economic rights, providing targeted attempts at inclusion in health and educational services through rights-based advocacy.

On 20 August 2021, as a result of concerted advocacy efforts, the Batwa community welcomed a unanimous ruling by the Constitutional Court of Uganda ordering the High Court to determine appropriate compensation measures, following the illegal evictions from their land. This follows a petition submitted by the community to the Constitutional Court on 8 February 2013, seeking recognition of their status as an indigenous people under international law and redress for the historic marginalisation, dispossession and human rights violations perpetrated against them. The Court in its judgement also held that the government and its agencies, the National Forestry Authority (NFA) and the Uganda Wildlife Authority (UWA) illegally evicted Batwa from their land.

These are just a few examples of how community-based paralegals have been able to amplify the voices of their respective indigenous communities to ensure that they continue being heard and that the rights of indigenous peoples are the foundation on which the discourse on environment and climate justice stands. The protection of the rights to land and natural resources is fundamental for the survival of indigenous communities not only in Africa but across the world.