People as Pawns to Power: The Unfolding Humanitarian Crisis on the Belarusian Border Needs Urgent Attention 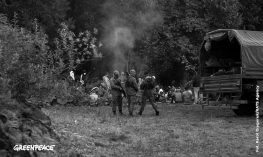 For an organisation established on the back of a humanitarian disaster that shocked the world, the lack of discussion at the opening of the United Nations General Assembly about events unfolding on the Polish-Belarusian border is deeply disappointing.

As feeble international efforts to hold Lukashenka to account failed, he instead consolidated power extending a vice-like grip on power in Belarus.

His revenge has been devastating and suggests a new level of depravity unfolding: dislocating and moving hundreds of desperate people to use them as pawns in a battle to re-establish his power and relevance.

Chastened by the fact that Belarusian dissidents took refuge in neighbouring Lithuania, Poland and Latvia, Lukashenka has been making public statements his revenge since May. He planned to ‘flood’ those countries with people and drugs; and as of yesterday, he further upped the ante, promising to unleash ‘terrorists’ into the European Union, whatever that may mean.

The world’s press is apparently not interested in this story which allows it to exist beyond global conscience.

Unfolding in the darkness, is the following: incentives and false promises are made through ‘travel agencies’ in Baghdad, Beirut, Karachi, Abuja, Yaounde and elsewhere to transport people to the European Union where they may be able to claim asylum.

Money changes hands, creating a lucrative trade with direct flights arranged to Minsk to fly people often in grave fear for their lives, away from caldrons of conflict, in the belief that they and their families will be able to make it to safety.

This expensive journey, sometimes also facilitated through visa-free travel from certain areas, is obviously a far safer option that the perils of overland and sea journeys that have now been well-documented as resulting in death.

The unfolding Afghan crisis has provided another source of people desperately fleeing the political deterioration of their home country.

From personal testimonies and evidence collected by Minority Rights Group International in conjunction with colleagues at Grupa Granica, a loose alliance of ten Polish civil society organisations working to respond to this crisis, it seems that there are around 4000 people trapped on the Lithuanian, 3000 on the Polish and 300 on the Latvian borders with Belarus right now, with a ‘supply chain’ directly into conflict and strife-ridden countries.

Eyewitness accounts that have penetrated the news blanket over Belarus indicate that the government is bussing people from Minsk airport to the border, where armed guards then force them over.

But with those borders being sealed, and with Poland declaring a state of emergency in the border zone—the first of its kind in Polish history, they are met with an armed presence on the other side that forces them back.

The consequence is that people with families, young children, some Yezidi women who are travelling unaccompanied, are all left in no-man’s land with no food or shelter. This week the first deaths happen: three people died so far. The most recent: a woman, surrounded by her three children.

Poland’s state of emergency comes with heavy militarized presence, a ban on outsiders, preventions of recording of any events, and a governmental narrative about a ‘hybrid war’ against ‘illegal migrants’ language not really used since the height of the refugee crises of 2015.

Local residents have been unable to act—some in fear that providing food to desperately hungry people they can hear crying out in the forest, is in violation of the law. The ban on recording information and disseminating it means that the crisis can conveniently be ignored.

Following on swiftly from Latvia and Lithuania, Poland has now also passed law that violates the Geneva Conventions—legitimizing ‘push-backs’ of asylum seekers over their borders. Individuals who have managed to make contact speak of being forced back and forward between border guards as many as 20 times in what is becoming a deadly game of ping-pong.

Despite desperate pleas from civil society organisations who are engaged with the situation, Red Cross either appears unwilling or unable to act to seek to penetrate the walls of this deathly game to provide humanitarian relief. For the many trapped in this situation, they are now desperate for deportation back home.

The impending arrival of winter is a looming threat as is the possibility of more arrivals into Minsk. It is imperative that the world’s media put this crisis where it belongs — high on the global agenda of issued to be addressed, and it is vital that an urgent humanitarian response is organised.

Forget about the inherent dignity and worth of every individual, if desperate people can be used as pawns in this manner to serve the interests of power, the world has not yet seen the depths of depravity that may still visit us.