Minority Rights Group > News > Middle East > Tunisia > Tunisia: Escalation in charges against Arroi Baraket are unwarranted and must be dismissed

Tunisia: Escalation in charges against Arroi Baraket are unwarranted and must be dismissed 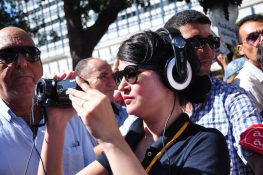 The signatory organisations condemn the escalation in charges brought today against Arroi Baraket. We demand for their immediate dismissal and a thorough investigation of the police officer who attacked her in retaliation for filming the street with her phone.

On 21 September 2021, Arroi was seen by the general prosecutor at the tribunal of the first instance in Beb Bnet, Tunis, enabling her to testify following false accusations of ‘assault against a public officer’. The accusation was brought against her by the police officer who violently attacked her on the night of 17 September 2021. On that same day, the prosecutor decided to send the case to the national guard of Bardo, where both Arroi and the police officer’s testimonies were heard. On 28 September 2021, Arroi was asked to present herself again before the general prosecutor at the tribunal of first instance in Tunis.

Today, the public prosecutor of Tunis issued a pretrial release in favour of Arroi, meaning she is free until the hearing. However, it also issued a warrant for a later hearing where Arroi will face charges of aggression with ‘extreme violence against a public officer’ – an even graver accusation than she was previously facing. Consequently, Arroi could still face trial during a hearing that will take place on 22 October 2021. Meanwhile, the complaint of violence filed by Arroi against the officer on 22 September has still not been processed by the office where it was presented.

The signatory organisations strongly demand that all charges against Arroi are immediately dropped and that the police officer who violently attacked her is investigated with a view to disciplinary action.

We also express our solidarity with Arroi and all those who peacefully seek to hold the police accountable for their actions. We recognise that the situation Arroi is faced with is not an isolated incident, and we unequivocally condemn the deeply embedded policy of impunity and the culture of harassment and intimidation by police in the country.