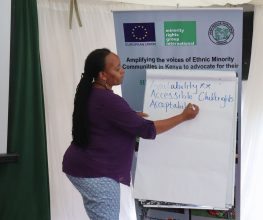 How do you, as an indigenous-led organisation, get authorities to understand the dire need for quality social services in your community?  How do you paint an accurate picture of the state of healthcare and education in a petition? Having accurate data goes a long way in helping your cause.

At a recent three-day networking and movement building boot camp for indigenous peoples in Kenya organised by the Ogiek Peoples’ Development Program (OPDP) in collaboration with Minority Rights Group, Salome Nduta, a social movement building trainer and expert emphasized the importance of having accurate data to strengthen advocacy for better service delivery in indigenous communities.

‘How many schools and health facilities are in your area? When we say pregnant mothers cannot access antenatal care, what does that look like?’ she pondered.

Salome made the comments after she noticed that the activists were using adjectives such as ‘few’, ‘little, and ‘far’ — as opposed to actual numbers, while talking about the lack of adequate and quality health and education services in their communities during an exercise.

‘If we do not start showing people the numbers that we are talking about, then they will never see sense in bringing more schools and hospitals to us. The will only value they will see in us (indigenous minorities) is votes,’ she noted.

The boot camp was attended by activists from the Ogiek of Mau and Elgon, Sengwer from Embobut forest and Endorois from Baringo.

To be equipped with facts on the state of service delivery in communities, Salome urged the activists to undertake constant studies.

In Uganda for example, the Maragoli view getting legal recognition in the Ugandan constitution as an indigenous community in the country as their most pressing need, while the Bennet want the stand-off around the status of their ancestral land in the present-day Mount Elgon resolved.

To support the cause of the Maragoli for example, who argue that their lack of recognition in the Ugandan constitution is affecting their access to government services such as issuance of national identity cards and passports, accurate numbers of Maragoli that have applied for and been denied identification documents would add more weight to a petition to parliament and other authorities.