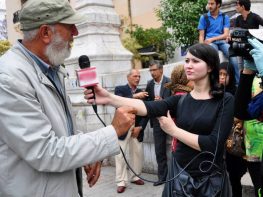 The following is a joint statement of MRG and Front Line Defenders.

On 30 September 2021, the public prosecutor of Tunis informed Arroi Baraket that her hearing will take place on 22 October 2021. The woman human rights defender will face aggravated charges of aggression with “extreme violence against a public officer”. Meanwhile, the complaint made by Arroi Baraket on 22 September 2021 before the public prosecutor regarding the violent assault against her by a police officer on 17 September 2021 in Tunis has still not been processed.

Arroi Baraket is a woman human rights defender, journalist and advocate for women’s rights in Tunisia. She also serves as the Tunisia Communications Officer for Tunisia in the Minority Rights Group (MRG). She has been active in reporting on anti-government protests from December 2020 to the recent protests occurring in September 2021 in Habib Bourguiba Avenue. She has been a vocal critic of the government’s security policies towards the peaceful and legitimate protests.

On 17 September 2021, Arroi Baraket was in a car with two friends returning home when they were stopped by a police patrol a few minutes after the curfew imposed to respond to the COVID-19 pandemic had begun. After signing the fine, Arroi Baraket saw that there were other cars in the street that were not being stopped by the police. As she began to film the street, her car door was flung open and an officer reportedly threw himself on her while repeatedly punching her and trying to take her phone. Even though Arroi Baraket assured the officer that she was only filming the street and not the police, the officer continued to attack her until he got her phone. During the incident, the woman human rights defender stressed that she was a journalist and had a right to film in public spaces.

Subsequently, Arroi Baraket approached the other officers present to lodge a complaint about the attack and demanded that her phone be returned and to contact a lawyer to accompany her to the nearest police station where she could formally report the incident. However, the officer continued to insult, intimidate and photograph her, and mocked her using misogynistic language. Later that night, Arroi Baraket, accompanied by her lawyer, went to the Al-Khadra neighbourhood police station with the intent to file a complaint against the officer. On arrival, Arroi Baraket learned that she was being accused and that her claim as a victim had been ignored. At 5AM the next morning, she was presented to the Public Prosecution Office in Tunis as an accused. After being interrogated by the assistant attorney general, she was released and told to present herself before the public prosecution on Tuesday, 21 September 2021.

Front Line Defenders and Minority Rights Group International believe that the charges brought against Arroi Baraket are directly related to the fact that she is woman human rights defender and a journalist. The signatory organisations are also concerned that the charges against Arroi Baraket form part of a wider pattern of harassment suffered by women human rights defenders based on the discrimination of their gender, and, in this instance, the use of state security forces to intimidate women journalists from challenging male authority. Unfortunately, the case of Arroi Baraket is not an isolated incident, and is embedded in a policy of impunity and the culture of harassment and intimidation by police in the country. Front Line Defenders and Minority Rights Group International urge the authorities in Tunisia to immediately drop all charges against Arroi Baraket and carry out an immediate and impartial investigation of the police officer who attacked her in retaliation for filming the street with her phone.

This joint statement was also published on the website of Front Line Defenders on 5 October 2021.

Photo: Arroi conducting interviews in Tunis in her capacity as a journalist in 2015.