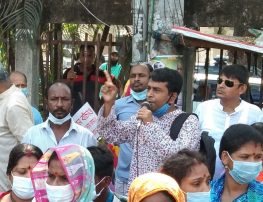 Minority Rights Group (MRG) strongly condemns the widespread attacks against Hindus in Bangladesh over the past week.

Violent attacks began sweeping Bangladesh as its Hindu minority community was celebrating its biggest annual festival, the Durga Puja, starting on 13 October. The violence commenced after a video went viral on social media apparently showing the Qur’an being placed on the knee of a statue of the Hindu god Hanuman, in a shrine for the festival in the eastern district of Cumilla.

‘These attacks are an inevitable result of nationalist and exclusionary rhetoric by politicians in Bangladesh and denial of the benefits of fostering religious and ethnic diversity in the country. Despite this, the government appears to deny any responsibility for recent events,’ says Claire Thomas, MRG’s Deputy Director. ‘The incidents are also a tragic reminder of the power of social media to do harm, especially in contexts where communities are divided and social tensions are stoked. That is when the need to intervene meaningfully to prevent misinformation, hate speech and hate-filled content becomes especially urgent.’

Bangladesh does have the Digital Security Act, a piece of legislation that the government claims regulates online content but religious minority communities allege is used more to restrict their free speech.

Reports from MRG’s partner, Human Rights Alliance Bangladesh (HRAB), detail how dozens of districts have been shaken by the violence; protests in Cumilla by those angered by the apparent insult to Muslims led police to fire into the crowd, killing at least four. Even though paramilitary forces were then deployed across the country to control the violence, attacks continued over the weekend, including the killing of a temple security guard in Chadpur district and the torching of scores of Hindu homes in Rangpur district. Attacks on over 80 Hindu shrines dedicated to the Durga Puja have also been reported across the country.

‘We stand in solidarity with HRAB as it peacefully protests against the violence and join its call for the government of Bangladesh to commission an independent investigation into the events,’ says Claire Thomas. ‘The government must proactively take steps to  rebuild social cohesion across religious and ethnic divides through concrete measures that promote respect for minority and indigenous rights,’ she adds.

Minorities in Bangladesh have long faced social, economic and political discrimination, as well as violence at the hands of state and non-state actors. Although the Constitution affirms certain rights for minorities, the legal environment has increasingly entrenched a narrow understanding of Bangladeshi identity and reflects growing politicization of religion. Since 2013 the worsening political crisis, rising extremism, and the issue of impunity and lack of enforcement of legal provisions have contributed to escalating levels of violence against minorities, including Atheists, Hindus, Christians and Buddhists.