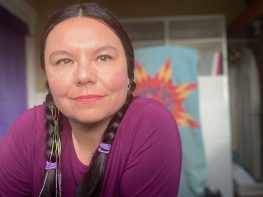 Eden Fine Day (she/her) is an Indigenous songwriter, singer and author. An intergenerational survivor of ‘residential schools’, Eden was born on the Sweetgrass First Nation in Saskatchewan and raised in East Vancouver, BC. She is passionate about her Indigenous culture and language and works to uplift Indigenous voices. Eden is grateful to be living on the unceded territories of the Tsleil-waututh, Musqueam and Squamish First Nations.

We will meet on our virtual sofa for a conversation between Eden Fine Day and Anna Alboth, our Europe Media Officer, in what will be the first of a series of 12 Sofa Talks this year with minority and indigenous women.

The traumatic history of Canada’s indigenous population, which makes up around 4.9 per cent of the population and includes First Nations, Inuit and Métis, has been well documented. Despite the diversity of these indigenous communities, each with distinct ethnic, linguistic and cultural backgrounds and traditions, they also share similarities, including a troubled history of land rights and jurisdictional violations by corporations and the Canadian government, as well as impediments to realising self-determination and political representation.

In 2015, after seven years taking statements from thousands of former residential school survivors, the Canadian Truth and Reconciliation Commission released its initial report exploring the impact of the residential school system on its Indigenous peoples, which it declared amounted to ‘cultural genocide‘, whereby ‘families are disrupted to prevent the transmission of cultural values and identity from one generation to the next.’ Children were removed from their homes and communities, often forcibly, and forbidden from speaking indigenous languages, severing a crucial link with their cultural identities and thus their ability to speak their mother tongue. The findings were accompanied by 94 Calls to Action to improve the lives of indigenous Canadians and address the long history of discrimination, exploitation and abuse they have suffered.

Make sure you tune in and hear Eden and Anna talk about indigenous rights in Canada, and share your favourite quotes using the hashtag #MRGSofaTalk. You can also submit your questions in advance by email at events@minorityrights.org.