Advocating for employment equality for religious minorities in Balochistan 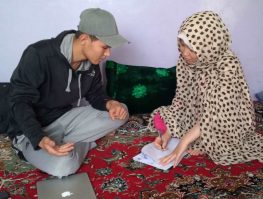 In Pakistan, members of religious minorities frequently experience violations of their human, socio-economic, and political rights, particularly in the Balochistan province. This presents an overarching threat to their lives.

In principle, everyone in Pakistan is guaranteed the right to freedom of religion or belief, since the country is a signatory to the Universal Declaration of Human Rights, and has signed and ratified the International Covenant on Civil and Political Rights. Yet in reality, exclusionary nationalism in Pakistan means that religious minority members often find their rights curtailed.

As religious minorities, Shias, Hindus, Christians and Sikhs experience discrimination and harassment in employment. The outbreak of Covid-19 only exacerbated this situation; as resources shrank, a funding scarcity emerged in both the public and private sectors. Employers stopped advertising jobs, reduced wages, and in some cases terminated employment. Applicants following Balochistan’s majority religion of Sunni Islam, as well as men, and people without disability, gained further advantage in the employment market.

In response, Health And Rural Development (HARD) Balochistan designed a project to empower religious minorities, vulnerable women, persons with disabilities (PwDs), and other groups affected by discrimination and harassment. The project equipped them with valuable knowledge about their rights regarding employment.

This project brought together different groups from minority religions to understand labour laws and advocate for their rights: men, women, young people, and persons with disabilities. Through trainings, they learned to monitor and document discrimination and harassment cases against religious minorities.

The group also developed a research report to inform their own advocacy, guide policymakers, and produce evidence for advocacy and legislation. They used this report to advocate for their rights, raising awareness on minority religion issues with Balochistan government authorities, and with employers, on the right to non-discrimination in employment.

At a conference of Balochistan journalists, the project participants held a media mobilization session and press conference. Ms Ayisha (pseudonym), from the Shia-Hazara community said, ‘I have experienced discrimination and harassment in employment many times in hiring, salary increment and firing by my employers and line managers and currently, I am unemployed after Covid-19 first lockdown. Now, I […] know that Article 20 and 27 [of the] Constitution of Pakistan and ILO Convention 111 protects my employment rights. I am really thankful to HARD/MRGI for this project which has educated and empowered me to dare and speak for my rights’.

Mr Hassanullah, an employer, said ‘neither [do] we [employers] have enough information on national and international labour laws, nor have we been notified and informed by the government or any other actor about these legal provisions, because everyone remains busy in their own tight schedule on a daily basis. I endorse and really appreciate HARD & MRGI who did not only influence and divert our attention on this serious issue, but also educated us on how we must follow the law and strictly adhere and combat all kinds of discrimination and harassment in employment, not only against religious minorities but against everyone.’

As a result of the project, the Director General of Balochistan’s Social Welfare Directorate issued a notification to all public and private sector employers, instructing them to follow all national and international labour laws while hiring, promoting, paying, and firing minorities. He further instructed employers to fulfil their responsibility and properly play their key role in ending discrimination and harassment in employment against religious minorities and other vulnerable communities.

A parliament member of the Balochistan Assembly and the Chief Secretary of Balochistan expressed their concerns over the employment-related issues experienced by religious minorities and other vulnerable groups in the province. Acknowledging that discrimination takes place in both the public and private sectors, they stated that they are trying to use their influence to eliminate it.

They also said that a 5 per cent job quota for religious minorities has been reserved and that they will advocate to increase this quota. They appreciated the efforts of HARD and MRGI, acknowledging the many serious issues raised in their report, and how it effectively raised their awareness of the issues members of religious minorities face in employment.

The HARD project participants also presented a Charter of Demands at the press conference. Read their demands below:

Today, we the Minority Rights Advocacy Group of Health And Rural Development (HARD) Balochistan right to non-discrimination in employment group with the assistance of ‘Minority Rights Group International’ are presenting this charter of demand in today’s press conference which has been developed after an extensive consultative / interview processes during various activities with parliamentarians, secretaries religious minorities and stakeholders related to discrimination in employment faced by minorities during or before Covid-19 on the grounds of religion, belief, identity and race/cast in Balochistan, Pakistan.

Dear Journalists, we really appreciate your contribution in highlighting and resolving public, minorities and other vulnerable communities’ issues and thank you for your continuous support to Civil Society Organizations who are struggling for the due rights and development of people particularly minorities, women, children and PwDs. In today’s press conference, we demand the Government of Balochistan and other public and private sector employers/authorities;

This project was conducted under the programme ‘Protecting the Rights of Religious Minorities‘, with financial assistance from Norwegian Agency for Development Cooperation (NORAD).