HRC41 – MRG concerned by the situation of Muslims, refugees and asylum seekers in Sri Lanka 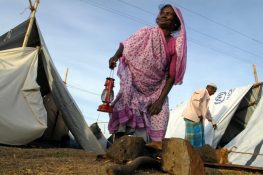 MRG echoes the concern expressed by the High Commissioner about the situation in Sri Lanka.

In the weeks following the attacks on Easter Sunday, Muslims in Sri Lanka have been subject to increased violence and intimidation, reaching critical levels in May, when Muslims and their residences, businesses, and places of worship were violently targeted in the North West of the country. The situation has been exacerbated by the inadequacy of the Government’s response, as well as incitement on the part of leading religious and government figures.

There has also been a rise in threats, violence, and hostility towards asylum seekers and refugees in Sri Lanka. Many have been evicted or otherwise forced from their homes, and some have suffered mob violence and property damage.

The majority of affected refugees and asylum seekers are from Afghanistan and Pakistan, and many are religious minorities who face persecution in their countries of origin.

The threat of deportation of asylum seekers has been especially concerning. Deportation of these individuals to their ‘home’ countries would raise serious risks regarding their safety, and potentially grave violations of the principle of non-refoulement.

Mr. President, while steps must be taken to hold perpetrators of the Easter attacks to account and secure justice for affected families, it is critical that this does not encourage or leave unaddressed violence and intimidation against often already marginalised populations in Sri Lanka.

The Government must make clear that attacks on these vulnerable groups will not be tolerated, and must ensure refugees or asylum seekers do not face deportation to countries of origins where they face risks to their lives and freedoms.