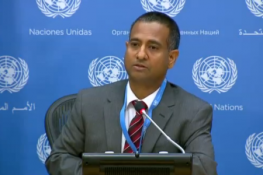 Minority Rights Group welcomes your excellent report. It captures the deep-rooted biases and the processes of essentialization and ‘othering’ of Muslims that lies at the heart of Islamophobia. This specific bias associates millions of individuals who are – or are perceived to be – Muslims with a monolithic set of beliefs, values and practices, perceived to be alien and dangerous, which in turn justifies and feeds hostility, discrimination and even violence against them.

Islamophobia is a worldwide scourge. It plays a meaningful role in the dramatic human rights crises unfolding in Myanmar and in China, as it contributes to justify and to make possible the egregious violations of the rights of Rohingya and of Uyghurs. Fuelled by political nationalist discourses in India and in Sri Lanka, it also encourages and validates discrimination and even mob violence against Muslim minorities. The same Islamophobic bias is also depriving millions of Muslims of Western Europe and North America from equal access to justice, to work, to housing and to health, while leaving them regularly subjected to profiling, surveillance, discrimination and violence.

The use of identity politics to target Muslims lies at the very root of the current state of our broken societies. Islamophobia, when it occurs in countries where Muslims form a minority, is now often linked to near official supremacist nationalist narratives. While in the short term this may provide power to those who wield it, in the long run it is robbing societies of the tools and attitudes to collectively survive and blossom.

Islamophobia affects the fulfilment of all human rights and your report clearly demonstrates the challenge that lies ahead. The increasing ease of flow of and access to information online and the parallel growth in hate speech is a rapidly emerging and shifting element of that challenge. As mentioned in the report, in certain contexts, discrimination based on religion or perceived religion shades into discrimination towards ethnic or racialised minorities.

We urge the Human Rights Council to consider the recurring themes arising within this report. We also call for greater attention to the inclusion of communities affected by Islamophobia (and other forms of discrimination based on religion or belief) in the efforts to achieve the Sustainable Development Goals, and we urge states to disaggregate data by religion or belief in reporting on that progress.

Click here to read the Special Rapporteur’s report on Islamophobia.