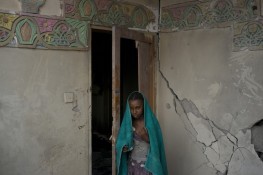 Minority Rights Group would first like to call the attention of this Council to the situation of minorities in Yemen, and specifically that of the Muhamasheen.

While the conflict in Yemen is often addressed as the forgotten conflict, the Muhamasheen, who form a considerable part of the Yemeni population and suffer from caste-based discrimination, are probably the most forgotten of this conflict.

In Aden, Taiz, Sana’a, and other locations, all with heavy concentrations of Muhamasheen, they suffer from an almost absolute lack of protection and dire access to an already scarce humanitarian assistance. Since the conflict started, areas where the Muhamasheen reside have been severely affected by fighting including aerial strikes. While a large number of the Yemeni displaced population in governorates such as Amran have been sheltered into schools and community centers or families, the Muhamasheen have often been displaced into open spaces or the edges of towns, making their access to whatever resources are available, such as shelter, water or medical emergency assistance, very hard if at all possible.

MRG has received reports of forced recruitment into various armed groups and of aid distribution being diverted by local sheikhs or those in charge of locally assigning and monitoring humanitarian distribution.

Furthermore, only 9% of Yemen’s Muhamasheen register their children at birth. This lack of registration and of personal documentation presents a further risk on the Muhamasheen displaced populations’ access to services, as well as their voices in Yemen’s future.

MRG calls on the members of the Council and donor countries to push for independent and effective investigations into suspected violations of human rights and international law in the Yemen conflict. This includes allegations of indiscriminate attacks on IDP camps, Muhamasheen settlements and targeted attacks against all minorities.

MRG also urges the Council to call for the protection of minorities and to condemn all attacks and acts of discrimination against minorities in Yemen today.

MRG would also like to draw the attention of this Council to the recent but rapid deterioration of the situation of the Ogiek indigenous people in Kenya.  In conjunction with our partner, the Ogiek Peoples’ Development Programme, MRG has been representing the Ogiek in a legal case before the African Court of Human and People’s Rights, challenging the Kenyan Government’s consistent denial of their land – and other – rights.  In March 2013, the African Court issued a provisional measures order, requiring the Government of Kenya to refrain from any act or thing that would or might irreparably prejudice the main application before the Court, until the final determination of the said application.  This Order is still in place.  The case was heard in November 2014 and judgment is anticipated.

MRG is therefore extremely concerned that the Ogiek of Ngongongeri area in Nakuru county have recently been subjected to the destruction of their homes, and violence – including one killing – by individuals, who appear to be protected by the local police.  Members of the Ogiek community have also been arrested and the Executive Director of Ogiek Peoples’ Development Programme has been questioned by police and intimidated.  These actions are in clear contravention of the Provisional Measures Order.

MRG calls on Kenya to condemn this treatment of the Ogiek, fully investigate these actions and to comply with the terms of the African Court’s Provisional Measures Order as a matter of urgency.