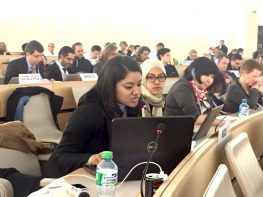 10th session of the UN Forum on Minority Issues

My name is Silvia Quattrini speaking on behalf of Minority Rights Group International and I would like to share our experience working with minority youth on culture in particular, by focusing on main challenges but also on the positive role that using cultural tools can have to bridge the divide between different communities.

Young members of minorities are often prevented from learning about their own cultures or are discouraged to do so, however the transmission and enjoyment of one’s own culture is essential to one of the pillars of minority rights, namely protection of identity, and states have an obligation to protect minority identity and encourage promotion as per Art. 1.1 of the Declaration.

In terms of challenges, minorities – and in particular minority youth – struggle in many countries to receive permission to stage public cultural events, as giving visibility to minority identities is often perceived as threatening the national identity. In Egypt, for instance, Nubian youth find that it is almost impossible to receive permits to stage celebrations of Nubian culture, as these are treated as a matter of public security.

The second challenge is that, even when permits are granted, minority youth actors and artists sometimes face hostility from majority audiences, who view minority youth culture with suspicion. There is a vicious circle here – the less majority children learn about minorities, the more hostile they and their families will be to minority cultural expression. Minority women, in particular, face specific obstacles to their participation in cultural life, both as actor and public, and often do not feel safe to be in the public space.

Minority youth can use cultural activities as a tactic to combat discrimination. In our work, we have seen minority youth groups across the Middle East and North Africa who seek to use street theatre to reach out to majority audiences and overcome exclusion. These events are an effective means to give visibility to common challenges faced by both minority and majority groups and allow these young artists to create empathy between communities.

At the same time, the creation of common spaces through culture can help youth belonging to majorities learn and understand minority cultures in order to prevent the stigmatisation and negative stereotypes that lead to discriminatory behaviour.

I would also like to stress that respect for culture is not a simply matter of preserving a frozen heritage, as cultures are living entities, and youth minority should be key actors in maintaining these cultures alive.

Photo: a minority rights activist from Nepal speaks at the UN Forum on Minority Issues, November 2017