HRC38 – Ukraine: MRG calls on authorities to prevent and remedy attacks against Roma 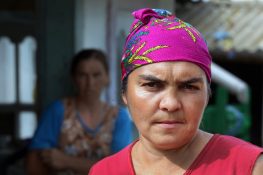 MRG wishes to express its deep concern at the outbreak of violent and sometimes fatal assaults on Roma communities in Ukraine over the past 3 months. Although these incidents appear to be the actions of far-right paramilitary organisations, MRG is convinced that a culture of impunity towards perpetrators of violence and intimidation towards Roma has emerged in Ukraine, directly as the result of the failure of the state authorities to address previous incidents involving public officials since 2016.

The recent attacks of Roma settlements, families and the murder of David Popp, have been undertaken in a climate of increasing hostility to Roma, which include organized violence and evictions led by public authorities. The highest profile of these was the illegal forced eviction of Roma families from the village of Laschynovska in Odessa in 2016 by village authorities.

Despite the international outcry at this incident, for close to two years, the families have been unable to return to their homes, no security or restitution have been offered to them, and official investigations have still not been concluded. The Roma community in Ukraine witnessed the murder of a Roma man, by a public official in Kharkiv in 2017, and forced evictions of Roma settlements in Kiev and Transcarpathia. In addition to the seven recent incidents already mentioned involving far-right groups, police in Lviv threatened a Roma community on 7th June with an ultimatum if they did not leave the area.

MRG appreciates the strong public statements of the Ministry of Interior of Ukraine and the Public Ombudsman, to the recent outbreak of violence. However, we also believe that the inaction of Ukraine authorities to previous incidents of harassment of Roma, has led to the current climate in which these incidents have been fostered.

We call on Ukraine to promptly investigate the recent incidents and to bring perpetrators to justice. The government should also take all necessary measures to ensure the security of Roma communities, in close consultation with the communities themselves. The Ukrainian authorities should also include new programs within the current National Action for implementation of the 2020 Strategy for Roma Integration, to provide trainings for public authorities (including police) on combatting discrimination and anti-gypsyism, as well as conflict prevention. These programs should be developed and implemented in consultation and partnership with Roma communities and should be fast-tracked for implementation.