Africa’s second largest nation after Sudan, Algeria borders Tunisia, Libya, Niger, Mali, Mauritania, Morocco and the Western Sahara, and stretches from its 1,104 kilometre Mediterranean coastline south through a varied topography to the Sahara Desert. Around 80 per cent of the country consists of the Sahara, where Algeria’s oil and natural gas reserves are located.

Berbers are the indigenous inhabitants of the North African littoral, isolated from the rest of Africa by the Sahara Desert. Jews arrived in the Maghreb before the mid-seventh century, when waves of Arab migration into the region brought cultural and religious changes, which the Berbers accepted. Intensified persecution in Spain in the late fourteenth and fifteenth centuries sparked a new Jewish migration into the region.
The area that is today Algeria became part of the Ottoman Empire in 1517. The Turks allowed ethnically defined guilds to maintain a broad degree of autonomy over their peoples, but discriminated against Jews, who were targeted with special taxes.

France’s invasion of Algiers in 1830 resulted in the disappearance of a third of the Algerian population due to France’s policy of extermination in the country. The conquest faced resistance well into the early 1900s, starting with Emir Abdelkader and Ahmed Bey and ending with the Tuareg in the south. In 1845, France created a three-tiered governance system for Algeria: one for European-majority areas that enjoyed self-government, mixed appointed and elected government for majority Muslim areas, and continued military rule for indigenous communes. In 1848, Paris declared Algeria to be an integral part of France, by which time European settlements were encouraged through the appropriation of rural land.

Arabs and Berbers in particular chafed at oppressive French rule. In 1954, the National Liberation Front (FLN) launched a guerrilla war against France that lasted for almost eight years. French forces targeted civilians as well as militants, and the conflict resulted in the deaths of over 1.5 million Algerians.

Algeria’s independence in 1962 was accompanied by the emigration to France of around one million people, mostly amongst the European-descended population. Algerian-born people who fought with the French army or supported a French Algeria were known as pieds-noirs and Harkis. Residual hostility towards both groups, post-independence, resulted in violence towards them leading the remaining few to leave in the 1960s and 1970s. The FLN had urged Jews to support independence and promised tolerance. Jews were sympathetic to the nationalists but many identified culturally with France. Attacks on Jews and the desecration of Jewish holy places in the late 1950s and 1960s led to large-scale emigration to France and Israel.

Colonel Houari Boumédiène overthrew Algeria’s first president in 1965 and consolidated the one-party system under the FLN, strengthened by the army. Boumédiène was an Arab nationalist who made conditions even worse for Algeria’s remaining Jews, and by 1970 there were fewer than 1,000 Jews left in the country. Military rule continued after his death in 1978.

High youth unemployment, inflation and corruption sparked massive popular unrest in the late 1980s. In December 1991, Algeria, then a pluralistic polity with virtually no political violence, held the first round of what were probably the freest parliamentary elections the Arab world had ever seen. The Islamic Salvation Front (FIS), a popular Islamist party, won in a landslide. Three weeks later, the military staged a bloodless coup, arguing that, if the FIS had been allowed to take power, those elections would have been Algeria’s last. The military dissolved parliament and suspended the constitution. In March 1992 it outlawed the FIS and imprisoned thousands of its members. This strengthened the radicals, who argued that violence was now their only option; they formed the Groupe Islamique Armé (GIA). After six months in office, military-installed President Mohamed Boudiaf was assassinated by one of his own bodyguards—an alleged Islamist—in June 1992. Fighting between the GIA and the Algerian military escalated into a full-blown civil conflict marked by insurgency, terrorism, and state violence.

Defence Minister Liamine Zeroual was appointed President in 1994 and in 1995 elected to office promising to end the conflict. Many Algerians assumed this meant talking to the leadership of the Islamist opposition, many of whom remained in detention. He did so, but the talks collapsed. The Armée Islamique du Salut (AIS), the armed wing of FIS, and the more radical GIA took control of tracts of the high plateaus which lie behind the coastal strip and the terror-ridden urban neighbourhoods.

In December 1996 the government claimed that a constitutional referendum outlawing religious parties, stripping power from the parliament and allowing the President to rule by decree had been approved by 86 per cent of Algerians. No independent verification of the vote was allowed. Algerians were quickly losing their confidence in the military-backed government. In a climate of fear and violence, moderates of all persuasions were pushed to the margins of public life, and all suffered infringement of their liberty. Former foreign minister Abdelaziz Bouteflika came to power in a flawed election in 1999, running unopposed after the withdrawal of all opposition candidates. Bouteflika introduced an amnesty for Islamist rebels that found some resonance, and war-weary Algeria turned towards an unsteady peace, marred in the ensuing years by violence that has taken the lives of further thousands.

[Sources: there are no reliable estimates for Berbers, this figure is based on CIA’s 2006 estimate for Algeria’s population (33 million) and calculated the Berber population based on the widely ranging reported figures of 20-30%. There are no reliable figures for Saharawi. This estimate is from the World Directory of Minorities (published 1997). Other reports put the figure at slightly higher, or roughly 0.5 per cent the national population)]
Algerians are primarily of Arab and Berber descent. The French population, approximately 10 per cent of the total in colonial times, has fallen to about 1 per cent today. Many other Europeans and almost all of the 150,000 Jews in Algeria also left the country after independence.

More than one million Algerians live abroad, chiefly in France. Arabic, the official language, is spoken by about 82 per cent of the population. Berber dialects are spoken, especially in Kabylia where government efforts to reinforce national identity through an ‘Arabization’ programme have faced resistence. The Shawiya of the Aurès, the Mozabites centred in the city of Ghardaia, and the nomadic Tuareg speak their own dialects. At the end of 1980s the hasty legalization of Islamist political parties, whose vision for society was that of one governed strictly by Islamic laws, was a prelude to political instability. Berbers are Algeria’s only numerically significant minority.

The conflict from 1992-1999 is estimated to have killed 150,000 Algerians. Although radical Islamist groups were responsible for much of the killing, government forces were equally violent. Women constitute 52 per cent of the Algerian population, but represent only an estimated 10 per cent of the workforce. The increasing islamization of the Algerian society in 1980s, under the influence of rising Islamist political movements, led to the undermining of women’s traditional role in Algerian society. This culminated in the introduction of a new ‘Family Code’ in 1984 that placed women under the guardianship of men. This Code was revised in 2003, however, to reduce the legal dependence of women on men.

Following Berber riots in 2001 over grievances including the lack of recognition of their Tamazight language, President Bouteflika expressed a willingness to accommodate their demands in new constitutional and political reforms. In April 2004 he was re-elected to a second term as president in a landslide victory that international observers declared free and fair despite complaints about his receiving support from government-controlled media. He promised to devote himself to seeking ‘true national reconciliation’ and to heal the divide between the Berbers and the Algerian state. Berbers had threatened to boycott the elections over their continuing demand that the Tamazight language should have equal status with Arabic. Violence between the government and smaller numbers of holdout militants continued, but at greatly reduced levels.

Meanwhile, post 9/11, attention has focused on the Islamic Salafist Group for Preaching and Combat. The group which has its origins in the Armed Islamic Group, (GIA), it is also believed to have links to Al-Qaeda and other militant groups. It operates across North Africa, and beyond. In March 2007, eight men were sentenced in 2008 in a Moroccan court, for planning terrorist attacks in Morocco, France and Italy. This perceived threat has led the US government to strengthen military links with the Algerian government, through training and intelligence-gathering.

Human Rights Watch, Impunity in the Name of Reconciliation, September 2004. 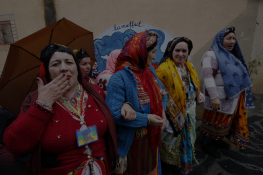 Tamazight speakers in the pandemic

Read our case study about Algeria.