Argentina is the second largest country in South America. It borders Chile to the west, Bolivia and Paraguay to the north, and Brazil and Uruguay to the east. Indigenous peoples live in many different regions throughout the country; in areas near international borders indigenous organisations proclaim a transnational identity (their own nations having been divided by the frontiers imposed by national states in the post-independence era).

Although Argentina was colonized by Spain, other European countries, including Britain, played an important role in its development after the conquest. Liberal governments of the mid- to late-nineteenth century greatly encouraged European immigration; by 1914 almost thirty percent of the Argentine population was foreign born (a great number of the immigrants were from Italy).

Indigenous communities were the victims of extermination campaigns in the eighteenth and nineteenth centuries on the part of those wishing to claim their lands. The most renowned campaign was the Conquest of the Desert led by President Julio Roca in 1879 (via which La Pampa, Patagonia and Tierra del Fuego were definitively incorporated into the Argentine state).

Welsh immigration to the Chubut region in Patagonia took place mainly between 1865 and 1914. Historical conflict over linguistic and political autonomy led to an unsuccessful attempt at secession at the beginning of the twentieth century.

Large-scale Jewish immigration between 1890 and 1930 provoked disapproval from the Roman Catholic Church and led to a pogrom during the ‘Tragic Week’ in 1919. Anti-Semitism among Argentine elites, particularly the armed forces, derived from French rightwing, Falangist, Fascist and Nazi sources.

Afro-Argentines are descendants of the slaves brought from Africa during the colonial period. By the late eighteenth century, slaves and free blacks accounted for approximately 25-30 per cent of the population in Buenos Aires, Mendoza, Tucuman and other cities. Many of them died fighting for Argentina in the wars of Independence (1810-1816) and the Cisplatine War (1825-1828). Since independence the country’s black population has decreased significantly.

The majority of some 2,000 Japanese who settled in Argentina prior to 1920 were immigrants who had re-emigrated from Brazil, Chile or Peru. Early migrants worked in a variety of occupations as unskilled labourers; they were subsequently employed in laundry and dry-cleaning businesses, or market gardening.

Approximately 400,000 people declare themselves to belong to or be a descendant of one of the country’s nineteen indigenous peoples. These peoples include the Guaraní/Mbyá (4,000), Quechua and Aymara, Mapuche (105,000), Toba (60,000), Wichi/Mataco (36,000) and Chiriguano. They now live mainly on the country’s northern and western fringes. (data: unless otherwise stated, Instituto Nacional de Estadistica, 2004-5)

Other minorities include Jews, who are largely based in Buenos Aires (250,000, according to www.jewish-issues.com), Japanese, Koreans, Welsh and small Arab and Asian populations. Argentina also has a small but politically aware Afro-Argentine community, living mainly in Buenos Aires.

Historically, the Argentine state has been unwilling to define a systematic, enduring indigenous federal policy. During the twentieth century state policies swayed from tutelage to integration: they were erratic, continually changing as new governments took power. Between 1912 and 1980 the organisations in charge of indigenous matters received 21 different names and changes of administrative jurisdiction. The first indigenous political organisations (beyond the community) emerged during the 1970s, and became more visible and vocal in the 1980s.

In 1985, as part of the process, Raúl Alfonsín’s government passed a new indigenous law, which stated that indigenous communities should receive sufficient land for their needs and that this land should be protected. It also created the Instituto Nacional de Asuntos Indígenas [National Institute of Indigenous Affairs, INAI] and allowed for bilingual education. In 1994 the Argentine constitution was amended, recognising for the first time the ‘ethnic and cultural pre-existence of the Argentine indigenous peoples’: it acknowledged the validity of Indian communities’ claims to land; it also guaranteed the right of indigenous peoples to bilingual/intercultural education. Since then, Argentina has ratified the ILO Convention 169 (2000). It also created the Instituto Nacional contra la Discriminación, la Xenofobia y Racismo [National Institute against Discrimination, Xenophobia and Racism, INADI] in 1995.

Despite the existence of these constitutional and legal measures designed to protect their rights, indigenous peoples and their lands continue to be threatened by the constant intrusion of investors and private enterprises (encouraged by the state). For this reason, indigenous organisations have been involved in an increasing number of protests in recent years. In 2002 for example, a number of organisations occupied the INAI, denouncing the organisation’s failure to represent indigenous peoples’ interests.

Some past governments have encouraged non-Welsh settlement of the Chubut area; tax incentives brought many non-Welsh enterprises, with whom the still predominantly Welsh agricultural community, which previously functioned as a co-operative, was forced to compete. Break-up of the co-operatives and other community organisations, as well as the lack of Welsh teaching in schools, has meant fewer and fewer people speaking the language. Furthermore, since it is associated with low status Welsh has often been rejected by younger members of the community. However, Welsh people suffer minimal ethnic discrimination and token support is given to demonstrations of ethnicity such as their annual eisteddfod.

In the post-war period Argentina became an international centre for anti-Semitic publications and neo-Nazi activity. During the military dictatorship of 1976-83, a large number of the disappeared were Jews. In the 1990s Carlos Menem’s government appeared committed to combating anti-Semitism. The car bombing of the Jewish Mutual Society of Argentina in 1994, in which 76 people were killed, provoked demonstrations of solidarity with the Jewish community. Just prior to this (1993), a holocaust museum was founded in Buenos Aires to remember the atrocities committed against Jews in the past.

Most of the 50,000 Japanese immigrants (http://www.janm.org/) and their descendants are located in and around Buenos Aires. Japanese assimilation and acculturation has advanced considerably, while Koreans and other Asian groups are subject to the same kind of racial discrimination as indigenous groups. The Consejo de Representantes Nikkei, an organisation representing the Japanese population of Argentina, was created in 1988.

Equipo Nacional de Pastoral Indígena [a church organisation, working with indigenous communities in Argentina; it reports on the many different type of educational/ training projects underway] “retrieved 24 May 2007, http://www.endepa.org.ar/”

Japanese American National Museum [has some interesting information about Japanese migration to Argentina] “retrieved 24 May 2007, http://www.janm.org/”

Mapuche International Link [provides information, in English and Spanish, about Mapuche history and culture, as well as the contemporary political struggle] “retrieved 24 May 2007, http://www.mapuche-nation.org/”

Mapuche Documentation Centre Ñuke Mapu [has material about the social, political, cultural and intellectual reality of the Mapuche people] “retrieved 24 May 2007, http://www.mapuche.info/” 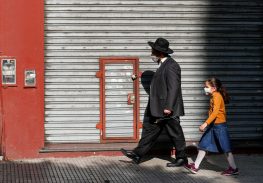 Antisemitism on the rise in the midst of the pandemic

Read our case study about Argentina.