Macedonia: Ethnic profiling and discrimination against the Roma at border crossings 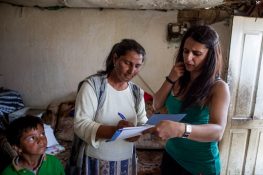 MRG submitted a third party intervention in three cases before the European Court of Human Rights concerning Roma individuals who claim to have been prohibited by the border control authorities from leaving the country as a result of their ethnic origin.

Such cases, when people of Roma origin were stopped by the border control authorities and could not leave the country, have been reported in numerous occasions under MRG’s Macedonia programme. Roma have historically suffered from widespread and institutionalised discrimination in many fields, such as the right to education, health or an adequate standard of living. MRG will take steps to tackle these issues in its advocacy and legal work.

MRG is expecting that the Court will deliver a favourable judgment which will bring a change in the existing discrimination against the Roma so that they can fully enjoy the freedom of movement both in their country and when they wish to leave it.