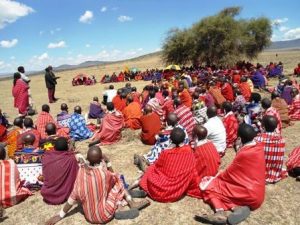 The right of self-determination for all peoples was first enshrined in the Charter of the United Nations. It has however been the subject of extensive debate and controversy. Both the content of the right as well as who can assert it continue to evolve in international law.

More recently, it has been postulated that the right to self-determination can be exercised ‘internally’ as well.[iii] Internal self-determination allows a people broader control over their political, economic, social and cultural development, while stopping short of secession. The development of a new conception of ‘peoples’ has evolved with the development of the idea of internal self-determination. In this context, the definition of ‘peoples’ is not only limited to the population of a fixed territorial entity but also encompasses indigenous groups and potentially some minorities. Although there is no fully accepted definition of peoples, references are often made to a definition proposed by UN Special Rapporteur Martínez Cobo in his study on discrimination against indigenous populations:

‘Indigenous communities, peoples and nations are those which, having a historical continuity with pre-invasion and pre-colonial societies that developed on their territories, consider themselves distinct from other sectors of the societies now prevailing in those territories, or parts of them. They form at present non-dominant sectors of society and are determined to preserve, develop and transmit to future generations their ancestral territories, and their ethnic identity, as the basis of their continued existence as peoples, in accordance with their own cultural patterns, social institutions and legal systems.'[iv]

Instruments protecting the right to self-determination

[4] Jose R. Martinez Cobo, Study of the Problem of Discrimination Against Indigenous Populations, Sub-Commission on the Prevention of Discrimination and the Protection of Minorities, UN Doc. E/CN.4/Sub.2/1986/7/Add.4 (1986).