Mapuche are the largest indigenous groups in Chile, comprising about 84 per cent of the total indigenous population or about 1.3 million people.

In some provinces in the eighth and ninth regions, a high proportion of the rural population is Mapuche. However, the majority of Mapuche people live in Chile’s cities, mainly Concepción, Temuco and Santiago. Less than twenty per cent of Mapuche are fluent in their native language (Mapuzungun) today.

Community leaders (llongkos) still have an important role to play in Mapuche social structure, as does the machi (a respected authority invested with special healing powers). The celebration of nguillatún (a ceremony in which the community gives thanks to and makes requests of the spirits) is still common among Mapuche; it was traditionally limited to rural areas, but is now celebrated by many urban communities too. Today Mapuche organisations are very visible on the national political scene. Most reject the separatist agenda and are prepared to negotiate with state institutions.

Historically, Mapuche people have dedicated themselves to agriculture. Today it is difficult to generalise. Many urban Mapuche have entered the teaching profession. In Santiago, many Mapuche women are employed as domestic servants.

The Mapuche remained independent throughout the colonial period and did not become part of the Chilean state until the 1880s, when the Chilean army invaded and occupied Mapuche territory. From this point, the frontier with Argentina formed an artificial boundary between the two halves of the Mapuche nation. Following the military campaigns, Mapuche people were removed to reservations, losing the majority of their ancestral lands. During the first half of the twentieth century these reservations were continually subject to division and expropriation by powerful landowners in the region. The scarcity of land was one of the reasons for the mass rural-urban migration that started in the 1930s.

A political movement in defence of an ethnic identity emerged relatively early in Chile. The first non-traditional (i.e. non-community-based) Mapuche political organisations – the Sociedad Caupolicán, the Federación Araucana and the Unión Araucana – were founded in the 1910s and 1920s. They had different goals and objectives, although these mainly revolved around communal lands (to protect them or divide them) and demands for increased access to education. By the 1950s several Mapuche had won municipal council seats in the southern regions; they were also Mapuche representatives in Congress.

The government of Salvador Allende (1970–73) passed an Indigenous Law (17.729) recognising the distinctive culture and history of Mapuche people in Chile. It also began to restore Mapuche communal lands, but this process was reversed under Pinochet’s dictatorship, which called for the ‘division of the reserves and the liquidation of the Indian communities’. After the passing of decree 2568 in 1979 the number of communities was reduced by 25 per cent. During the Pinochet regime many Mapuche leaders were murdered; others were threatened with imprisonment or exiled.

In a declaration made at the unofficial gathering in Santiago which marked the commemoration of the 500th anniversary of Columbus’s so-called ‘discovery’ of the Americas, Mapuche political leaders denied wanting to establish an independent state and reaffirmed their aims of cultural autonomy and territorial rights while remaining ‘obligatory’ Chilean citizens. The passing of the new Indigenous Law (19.253) in 1993 recognised Mapuche collective land rights and the need for bilingual education. In July 1994 delegates at the UN Working Group on Indigenous Peoples, while admitting the benefits of law 19.253, urged that Chile ratify ILO Convention 169. It took another 14 years for this to happen, namely in September 2008.

The creation of CONADI (the National Corporation of Indigenous Development) in 1993 meant that more Mapuche people became involved in the policy decisions affecting their communities. However, their presence in state entities has not always assured them of a voice; directors of CONADI, for instance, could be and were removed if they opposed the government’s agenda. The frustration caused by this situation and the escalating conflict over communal lands in the south led to the emergence of more radical and separatist Mapuche organisations in the late 1990s such as the Co-ordinadora Arauco-Malleco.

In November 2011, Mapuche protestors in the southern region of Araucanía once again clashed with Chilean police to demonstrate against plans to build an airport on Mapuche land. In January 2012, the Santiago Court of Appeals rejected the Mapuche claim and ruled that they airport project could go ahead. The decision was criticised for not adequately taking into account the consultation requirement of ILO Convention 169.

Mapuche demonstrations and hunger strikes have been an almost annual occurrence since 1984 when the state enacted the Anti-Terrorist Law during the military dictatorship of General Augusto Pinochet. The law was aimed at curbing Mapuche protests over the loss of their lands and resources. Among other controversial features, the law allows for military trials and the use of anonymous witnesses who cannot be cross-examined by the defense.

Mapuche organizations in Chile, with the support of international human rights groups, continue to demand constitutional recognition for indigenous peoples. Protests against the government’s counter-terrorism legislation, which led to the arrest and imprisonment of many Mapuche leaders in the southern provinces, have received a significant amount of media attention in the country and abroad. Hunger strikes by prisoners have also put pressure on the government.

Mapuche organizations have been relatively successful in their claims for bilingual and intercultural education, for it remains a key aspect of the state policy today. However, many Mapuche people have complained that improvements have been more theoretical than practical: a lack of resources means that many schemes are not fully implemented and bilingual education has often been reduced to the learning of a few words in the indigenous language Mapuzungun. Mapuche organizations in rural and urban areas are involved in many schemes to try to reform the teaching methodology as well as content.

Araucanía remains the poorest region in Chile; Mapuche people remain among the poorest, least educated and most malnourished sector of Chilean society.

Despite the government’s promises to resolve the Mapuche conflict, violent confrontations over collective land and water rights and human rights abuses against indigenous peoples have continued. Police have participated in raids and violent attacks against communities in areas where lands were under dispute, with a number of Mapuche injured or killed in these incidents, with others arbitrarily detained and beaten in custody. There is a long history of police brutality against young Mapuche men, many of whom have died as a result of excessive force. One of the most recent high-profile cases was that of Jaime Mendoza Collio, who was shot in the back by police during a peaceful protest in 2009. An internal investigation conducted by the police cleared the officer involved. A military court subsequently found the officer guilty and sentenced him to five years in prison – a decision overruled by the Court Martial the following year – and it was not until 2013 that the Supreme Court ruled that the conditions for self-defence had not been met and the officer was sentenced to three years on probation.

Abuses by security forces and officials persist to this day. During a visit to Chile in 2016, the UN Special Rapporteur on the Rights to Freedom of Peaceful Assembly and Association found numerous instances where the police had used excessive force in order to stop protests by indigenous peoples. In 2015, for instance, a group of Mapuche led a peaceful occupation of the National Corporation for Indigenous Peoples’ Development (CONADI) in order to demand respect of their land rights in Bajo Malleco. Police forces used violent tactics to disperse the crowd, many of whom were children.

Overall, the Mapuche have very little representation in the Chilean Congress and Senate. Feeling the need for a political instrument of their own, Mapuche in the southern regions of Araucanía, Los Ríos and Los Lagos took steps in July 2008 to formally register a new political party. One of the main goals is to achieve Mapuche self-government. The party, called Wallmapuwen, which means ‘people of the Mapuche land’ in Mapuzugun, defines itself as pro-autonomy, democratic, progressive, secular and pluralistic and is seeking to recreate ‘Mapuche land’ (Wallmapu) in the ethnic group’s ancestral territory of southern Chile and Argentina where most Mapuche are still concentrated.

The party hopes first to have the Chilean state grant autonomy (within the Chilean political-administrative structure) to the region of Araucanía as well as adjacent municipalities. Mapuche communities would recover their ancestral land, Mapuzugun would be the official language and the autonomous region would have its own regional legislative and executive bodies democratically elected by all voters in the region.

However, progress towards greater recognition remains slow. In 2015, the government removed the Governor of Araucanía, Francisco Huenchumillia, for openly advocating for political and legal reforms that acknowledge Mapuche rights.

MRG welcomes the resolution of a long standing dispute between Mapuche Indians and the Chilean government, which brought an end… 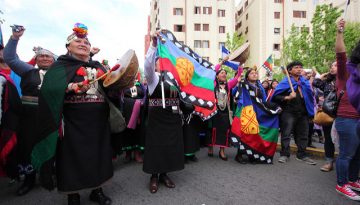 During the eighteenth and nineteenth centuries Argentina's indigenous communities, including  Mapuche, were the victims of extermination campaigns conducted by those…