While some Mon groups contend that there are between 4 million and 8 million in Burma, other estimates are much lower, being in the vicinity of 2 per cent of the country’s total population, or just above 1 million. The latter estimates appear much too low though, perhaps because they may refer to speakers of Mon, whereas higher estimates may be of those who have Mon ancestry. Most ethnic Mon live in or near Mon State, wedged between Thailand to its east and the Andaman Sea coastline to its west.

Mon is a Monic language from the Mon-Khmer group of Austro-Asiatic languages, though many also use the Burmese language and are literate only in Burmese. The vast majority of Mon are Theravada Buddhists, with some elements of animist practices.

The Mon were one of the first groups to settle in Burma, possibly even before the first millennium BCE. They gradually expanded eastward into Thailand, reaching as far as present-day Laos, but were stymied in this movement after the eighth century when they encountered the Khmer kingdom of Angkor. A series of Mon kingdoms ruled much of Burma for a large portion of the next 1,000 years, but their dominance was increasingly eroded as ethnic Burmans and Tai began to move into the region and assert themselves, as in the year 1057 when Burmans established the kingdom of Bagan after having defeated the Mon.

The ensuing centuries were to see a flurry of competing Burman, Mon and Tai kingdoms emerge, but by the eighteenth century Burman supremacy was firmly established after the fall of the last independent Mon kingdom in 1757. There followed massacres which still loom large in the collective memory of the Mon: after his victory, Burman king U Aungzeya is said to have had tens of thousands of Mon killed, including 3,000 Buddhist priests in the capital city alone. Much of Mon literature was destroyed, the use of the Mon language was forbidden, and large numbers of Mon fled to Thailand.

Less than a century later, the British arrived and incorporated all of what is now the Mon State into Burma by the end of the Second Anglo-Burmese War in 1852. There are claims of British promises to re-establish a Mon kingdom and (some) Mon assistance for the British in the war against the Burmans. Large numbers of Mon returned from Thailand (Siam) after the defeat of the Burmans. In the end, there was no Mon kingdom restored and, by 1886 and the end of the Third Anglo-Burmese War, all of Burma was annexed by the British.

During the colonial period Mon territory was to a large degree administered as part of ‘Burma Proper’, or what was sometimes referred to as ‘Ministerial Burma’ as opposed to the Frontier Areas. While some minorities had a degree of autonomy or feudal rule preserved as part of this arrangement the Mon were essentially left out of any form of autonomy or representation altogether.

Largely excluded from the historical Panglong Agreement as to the shape of the soon-to-be-independent Burma, the first Mon armed organization soon appeared. The Mon National Defence Organization (MNDO) was formed in 1948 as a response to what was seen as the growing threat of a Burman-dominated state established without any consideration of the rights or claims of the Mon. In the same year, the MNDO carried out its first violent offensive by seizing weapons and a police station alongside Karen armed groups – though the Mon and Karen insurgencies are usually dated from a later event, in January 1949.

Together with many other armed ethnic groups, the majority of Mon insurgents agreed a ceasefire with the U Nu civilian regime in 1958. However, the New Mon State Party (NMSP) continued to fight the military government. To address some of the Mon demands a theoretically autonomous Mon State was established under the 1974 Constitution. NMSP armed activities against the Burmese government continued nevertheless until a ceasefire agreement in 1995.

The State Law and Order Restoration Council (SLORC) and then the State Peace and Development Council (SPDC) army did not cease their operations after 1995. Since then the human rights of Mon civilians have continued to be breached by the Burmese state and military. Nevertheless, there was initially some optimism after the ceasefire agreement of 1995, with the NMSP for example expanding its Mon-language community school system and hoping to be able to operate relatively freely in party-controlled areas in the districts of Moulmein, Tavoy and Thaton. It was also hoped that the region would be opened up to development opportunities and receive greater assistance from international aid organizations.

While the first steps towards these goals have been taken, the situation remained highly problematic: the SPDC imposed greater restrictions on the NMSP over local development projects, and reports indicated that the government maintained a ban on the Mon language after primary level in state schools. In addition, there were reports of government and military officials forbidding even Mon community schools from also using the Mon language as medium of instruction, despite the NMSP’s initial successful efforts in building up this system of private schools.

The Burmese army continued to conduct occasional raids in those Mon areas where the ceasefire has not held. Severe human rights violations were registered, including enforced labour, displacement, rape and murder, and widespread land confiscation. As a result, there was a mass exodus of Mon to Thailand.

The New Mon State Party (NMSP) signed a bilateral ceasefire in 2012. It chose to not sign the Nationwide Ceasefire Agreement (NCA) of 2015 as the NCA did not include all armed ethnic national organizations and continues to launch military offences against some of them

As the country has opened up to foreign investment, the Human Rights Foundation of Monland (HURFOM) reported in 2016 that land confiscation is continuing, but whereas in the past the military was responsible for confiscation, it is now increasingly foreign and domestic companies. While there may now be legal channels to address land confiscation issues, they are largely ineffective. Land rights remain insecure, and cases of past land confiscation remain unresolved.

In April 2014, the Mon state parliament authorized the teaching of the Mon language among primary school students – the first time a minority language has been taught in government schools for decades. Implementation has been difficult though, with seriously under-resourced schools and difficulty finding Mon-speaking teachers. 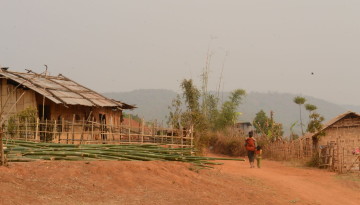 Minorities must not be left out of Burma relief efforts