Pashtuns (also called Pushtan, Paktun or Pathan) are the largest ethnic group in Afghanistan. Though their exact numbers are uncertain and as with other communities are contested, previous estimates have suggested that they make up around 42 per cent of the population. They live mainly in the south and the east of the country. They have a distinct language called Pashto (an official language since 1936) but also speak Pakhto, which are both Iranian dialects that fall within the Indo-European group of languages. They are generally able to speak Farsi when necessary, often relying on the language in the context of trade dealings in the region. It is speculated that Pashtuns are descendants of Eastern Iranians, who immigrated to the area from Persia. However, there is also an interesting legend, which claims that they actually originate from one of the ancient tribes of Israel. Pashtuns are Sunni Muslims and can also be found in Khyber Pakhtunkhwa in Pakistan (about 14 million).  They are seen as the historic founders of the Afghan Kingdom, with an apparent predominance in administration power until recently.

The social structure of the Pashtuns is based on the Pashtunwali (or Pukhtunwali) code, which is a mixture of a tribal code of honour and local interpretations of Shari’a. This requires the speaking of Pashtu and the adherence to established customs. Hospitality, protection of their guests, defence of property, family honour and protection of the female relatives are some of the most important principles for Pashtuns. They rely on the tribal council jirga for the enforcement of disputes and local decision-making, as well as the seclusion of women from all affairs outside the home. A major aspect of the Pashtunwali code emphasizes personal authority and freedom. Women are required to wear full-face and full-length garments known as the burka. Pashtun culture is celebrated for its traditional music, dancing, poetry and storytelling.

A majority of Pashtuns rely upon agriculture (irrigated wheat) and animal husbandry for their source of income, with some involved in trading in these and other commodities. Population relocation and poverty caused by the chronic lack of stability in Afghanistan has led to a rise in drug trafficking, mainly opium via Pakistan to Europe and North America. The difficult living conditions together with the lack of clean water and health care contributes to a short life expectancy of only about 46 years. Those living in the Kabul area seem to enjoy slightly better living standards.

Despite their past political dominance, Pashtuns have never formed a homogeneous group, and many have fallen victim to oppression at the hands of the elites from their own community. The power and leadership of individuals are perhaps what divides Pashtuns, not only into different tribes but also into numerous sub-tribes, each isolated within their own borders. Interference in each other’s affairs has caused conflict among sub-tribes throughout their history. Yet despite their infighting, they have generally rallied to form a unified front when challenged by external threats or interference by a central non-Pashtun government.

Pakistan’s policy has been mainly supportive of the Pashtuns, especially in more recent times, but does not support the claim for self-determination of the 13 million Pashtuns living in the province of Khyber Pakhtunkhwa, out of fear of losing part of their territory.

Pashtuns are historically the dominant ethnic community in Afghanistan, and they have actively fought to keep their predominance throughout Afghan history. In the years before 1978 Pashtuns made up about 40 per cent of the Afghan population. After the Soviet invasion in 1979, some 85 per cent of the more than 3 million Afghan refugees in Pakistan were Pashtuns. They have always played a central role in Afghan politics, and their dominant position has been a major catalyst in triggering conflict. For example, conflict arose between partners in the Mujahidin coalition which fought the Soviet troops and opposed the regime of President Mohammad Najibullah. Following Soviet withdrawal and that regime’s collapse, President Burhanuddin Rabbani represented the Tajik minority, whereas opposition troops led by Gulbuddin Hekmatyar, and those of the Taliban, were mainly Pashtun.

The Taliban rule was based on a strict and controversial interpretation of Shari’a law and it was responsible, during its dominance, for grave human rights violations based on gender, and also for ethnic discrimination. This period brought severe poverty to Afghanistan, accompanied by food insecurity for most Afghans, and large-scale displacement and emigration, though some Pashtun communities were treated favourably and protected against the worst of the conditions. However, though Pashtuns were in power, the majority of the community nonetheless continued to suffer discrimination. This was particularly true for Pashtun families who had been moved to the north more than 100 years earlier by Amir Abdur Rahman Khan, as part of a state consolidation effort. They were left to the mercy of the Tajiks and Uzbeks who are the predominant ethnic groups in the area. There have been reports of ethnic massacres at Mazar-e-Sharif in 1997 and 1998 and continuing reports of violence targeted against the Pashtuns (whether or not formely Taliban supporters) as vengeance for the Taliban regime’s excesses.

With the collapse of the Taliban regime and the signing of the Bonn Agreement in 2001, Pashtun dominance over the other ethnic groups in Afghanistan came to an end. Of the estimated one million internally displaced at that time, most of those remaining in displacement were Pashtuns, who had been uprooted by ethnic violence in the north and the west of the country.

Since the fall of the Taliban, there has a fundamental shift in the traditional power balance. Although the first post-Taliban president, Hamid Karzai, belongs to a prominent Pashtun family from Qandahar, the central government was largely dominated by the Uzbeks and Tajiks of the Northern Alliance. This less privileged position in administration and power has created obvious dissatisfaction among Pashtuns. Following the final results of the most recent 2010 parliamentary elections, Pashtun parliamentary candidates from Herat and several other provinces staged protests, claiming that they were systematically excluded from the election process through fraud and intimidation. Nevertheless, Pashtuns remain the largest ethnic group and therefore in an increasingly democratic system are likely to regain their influence.  Indeed, Karzai’s successor, President Ashraf Ghani is also a Pashtun, although when he took office in 2014, he signalled his intention to break through ethnic barriers by dropping his tribal last name from official documents. 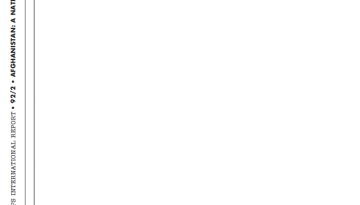