Rapa Nui (Easter Island) is the easternmost island of Polynesia; it is over 3,000 kilometres from mainland Chile. Food supplies are shipped/flown in from the mainland. The Rapanui are a Polynesian people, the majority of whom live on Easter Island. A few hundred live on mainland Chile and in Tahiti. As of 2013, only 2,553 people self-identified as Rapanui, comprising about 0.3 per cent of Chile’s total indigenous population. The majority of this community lives in urban areas. In comparison, in 1992 over 20,000 people identified themselves as Rapanui.

This does not indicate a high death rate, but rather shows the changing nature of ethnic categorisation and census-taking. (Some indigenous organisations complained of statistical genocide but local leaders seemed to concur that the later figure was more realistic.) The Rapanui are represented on mainland bodies such as the National Corporation for Indigenous Development (CONADI). They also have their own political authorities, such as the Consejo de Ancianos [Council of Elders], which was formally instituted in the early 1990s, but dates back to the Allende period.

Easter Island was first occupied over 1,000 years ago but this was followed by only sporadic contact with outsiders. Europeans first ‘discovered’ the island in 1722. Between 1859–1862 almost 1,500 Rapanui were captured and taken to Peru as slaves. Only fifteen returned, and they carried diseases such as smallpox, which decimated the island population (by 1877 this had been reduced from several thousand to 110).

Under a treaty of 1888, Chile assumed administrative responsibility for the island in return for respecting Rapanui lands and culture. This guarantee was not honoured: the Rapanui virtually became prisoner in their own lands, confined to the Hanga Roa area (of approximately 1,000 hectares), and they were frequently forced to work for little or no pay. Eduardo Frei Montalva’s government (1964–1970) sought to improve the situation: in 1966 it passed the Ley Pascua, making the Rapanui full citizens of Chile (with the same rights as other Chileans). At the same time, though, the law also acknowledged the distinctiveness of Rapanui culture by changing the sentences for certain crimes committed on the island. It ruled that theft should receive a lighter sentence than it did on the mainland, on the basis that the Rapanui had little concept of private property.

The military government of Pinochet poured in a large amount of public funds into Rapa Nui, building and maintaining public infrastructure. In 1985 Rapanui opposition to the extension of the island’s airstrip for use by the American space agency NASA was ignored by the Pinochet government – the extension was opened in 1987.

In 1992 Rapanui elder Mr Hotu became the first elected mayor of Easter Island. In 1993 Chile’s new Indigenous Law recognised the cultural and territorial rights of the Rapanui, and foresaw the creation of a Commission for the Development of Easter Island. (It was finally installed in 1999). In 2001 the Council of Elders No. 2 (as opposed to the original Council of Elders, which agreed to participate in the Commission), set up the Rapa Nui Parliament. This self-appointed Parliament aimed to recuperate all Rapanui lands. It demanded a limitation on the development of economic and commercial activities by state employees on the island. It also demanded labour norms that favoured the native population. The Comisión de Verdad Histórica y Nuevo Trato (2003) recommended that Rapa Nui be granted special autonomous status.

Like the indigenous Mapuche on the South American mainland, indigenous Rapanui on Chile-controlled Easter Island in the Pacific are becoming increasingly vocal about control of ancestral lands.

In August 2010, Rapanui families began occupying contested areas on Easter Island after failing to obtain legal redress for their land claims. In early December 2010, Chilean police were flown 3,000 miles to the island to enforce a court decree ordering the removal of the Rapanui protesters. According to news reports, the Chilean police shot at protesters with rubber bullets and used batons, resulting in the wounding of 24 people, including the president of the autonomously created Rapa Nui Parliament.

In October 2010, in the hope of preventing further violence, the Washington, DC-based Indian Law Resource Center (ILRC) – which is representing the 28 Rapanui clans – filed a Request for Protection before the Inter-American Commission on Human Rights. In 2011, the Commission granted precautionary measures in favour of the islanders, ordering the Chilean government to immediately stop the violent use of armed force against the Rapanui, to guarantee the safety and humane treatment of Rapanui, and to begin an investigation into recent events. Meanwhile, Rapanui elders vowed to continue their protests. In 2015, Rapanui elders began to manage sacred archaeological sites; the government responded with arrests and prosecutions. The community has again turned to the Inter-American Commission for further precautionary measures.

Rapanui people do not seek complete independence from Chile but, as shown by the demands of the Rapa Nui Parliament, aspire to a degree of cultural autonomy and control over land and cultural resources. The Council of Elders is divided as to how far to negotiate with Chilean state entities. The recommendations of the Truth Commission regarding the island’s autonomous status are still being debated.

Rapanui are now being given grants to study in mainland Chile; many students, including women, study engineering and plan to return to the island on graduation. The government has provided student residences for Rapanui in Santiago.

Local organizations have been working together with the Consejo de Monumentos Nacionales (National Monuments Council) for the restoration and conservation of Rapa Nui’s archaeological and cultural heritage. Several cultural groups such as Ballet Cultural Kari Kari have been set up. Tapati, the island’s annual festival of culture and arts, is a very popular event.

Major problems on Rapa Nui today include unregulated fishing, scarce healthcare facilities, substandard schooling and unemployment. Most Rapanui who do work are employed in tourism. There is an ongoing debate about the way in which the revenues from the tourist industry are distributed: many people complain that the major share of revenue goes to the Chilean state and that it is not greatly benefiting the local economy, hence the demand for ‘tourism with development’. In this context, indigenous rights issues are closely linked to questions of sustainability and responsible resource use.

71.5 per cent of the territory on Easter Island is owned by the government and shared between the Vaitea Fund and Rapa Nui National Park (PNRN), who oversee the management of its natural resources. The PNRN recently agreed to a new model of administration for the park without consulting the appropriate Rapa Nui representative organizations. Many of these organizations face difficulties in obtaining legal recognition from the government, thus are often not included. 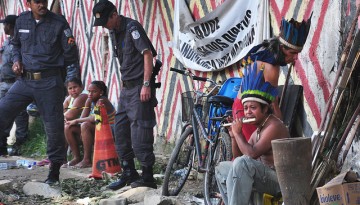 MRG ’broadly welcomes’ American Declaration on Rights of Indigenous Peoples, but expresses concern on lack of need for free, prior and informed consent on land issues