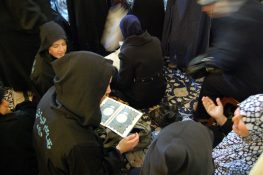 This programme promoted minority protection and religious freedom in the Middle East and North Africa (MENA) region. The programme approached the issue of freedom of religion in a way that is sensitive and inclusive – protecting both non-Muslim and Muslim religious minorities.

The programme increased understanding of the specific vulnerabilities facing religious minorities in the Middle East and North Africa region, and strengthened the capacity and commitment to address these issues among human rights activists, and among decision-makers locally, nationally and internationally.

Since 2011, following the Arab spring, the MENA region has witnessed extreme levels of turmoil, including wars on many fronts and the emergence of political and societal challenges, most notably the growth of religious extremism and sectarianism. The scenario for religious minorities in all countries across the region is precarious – although to varying degrees – and continues to drive large-scale forced migration.

Yezidi have suffered especially egregious and large-scale abuses at the hands of ISIS. In other MENA countries – Lebanon, Libya, Tunisia – ISIS offshoots are also now active, and religious minorities are increasingly under threat. In Eqypt, while freedom of religion is constitutionally protected, serious levels of harassment are an ongoing challenge, including attacks on Coptic Churches and Sufi shrines.