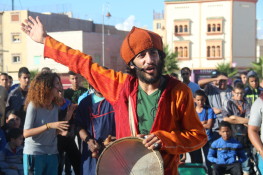 This new exciting programme uses culture to promote diversity and challenge discrimination against minorities. Leading edge theatre stirs the streets of Jordan, Palestine and Israel; performances that demand your attention in the cities of Morocco, Algeria and Tunisia – in seven countries local artists will promote diversity through theatre to the general public in a fast changing environment. This cultural and rights-based venture will use powerful theatre whose content is driven by a pioneering idea-sharing network across the region. Groups will have opportunities to unite ensuring that the drama is non-exclusive, has perspective and engages all levels of society.

The work will have immediate contact with audiences, as post performance debates between actors and public will trigger dialogue about multiplicity, difference, discrimination, equality and justice.  The programme will raise awareness of the role of culture in social cohesion in a wide-ranging but profound way.

This programme is funded by the European Union in the regional programme ‘Media and Culture for Development in the Southern Mediterranean Region Programme’, which aims to support the efforts of the Southern Mediterranean countries’ in building deep-rooted democracy and to contribute to their sustainable economic, social and human development, through regional co-operation in the fields of media and culture. It supports activities fostering cultural policy reform and reinforcing the capacity of cultural policy makers, as well as promoting investment and the development of cultural operators’ business capabilities.

The programme, which started in March 2014, will implement the following main activities:

Why we are implementing this programme?

Our research showed that matching minority- and artist-led organisations would bridge the need for drama, technical, marketing, media and project management skills in the former and the need to build knowledge/trust of minority communities in the latter. In many places discussion of the existence and positive integration of minority communities is just beginning to happen as part of transition processes (e.g. Libya and Tunisia). This means arts organisations are interested in minorities but do not necessarily feel able to take this forward.

Links between artists from different countries are still very limited for the most part – regional festivals allow exchanges (e.g. film and music festivals) however there is much more limited exchange in terms of drama. Some links do exist between minority communities because of common heritages, however, these minority based links are at the level of either families, personal relationships, or political activism, and rarely involve collaborations, joint work or sharing by artists (some exceptions involve music and film).

Finally, ministries of culture are often ambitious in their National Strategic Plans as are Ministers of Culture in their public statements (e.g. Khalida Toum of Algeria or similar) and may be positive about theatre as a medium (e.g. OPT). However, national budgets for culture are very limited (e.g. less than 1% of PNA budget) and thus, may struggle to make significant progress.

MRG is implementing this project in partnership with Civic Forum Institute (CFI) based in Ramallah, and Andalus Institute for Tolerance and Anti-Violence Studies in Cairo. Below you can read more information about both of them.

Civic Forum Institute Palestine (CFI) is a non-profit Palestinian organisation that works to build and strengthen the foundations of democracy in Palestine and develop Palestinian civil society organisations. It raises citizen’s awareness of democratic principles and processes, and empowers local leaders and organisations through programs and activities organised in local communities throughout Palestine.

Andalus Institute for Tolerance and Anti-Violence Studies is an independent research institution that relies on the values of tolerance and citizenship, aiming to contribute to human development in Arabic societies. It does so spreading the culture of tolerance through fighting and antagonizing.

This evaluation found that the project design was relevant. It concluded that the capacity building elements had succeeded as:

‘The DDD succeeded in building a regional cohort of experienced professionals with the capacity to link minority rights, cultural rights and drama. There was tangible evidence of (i) technical and soft skills development; (ii) higher awareness of discriminations faced by the minorities; (iii) higher engagement with the minority cultural rights after the project; and (iv) higher motivation among artists and activists in designing common projects for their countries and across the region.’

She also found that:

‘To begin with, no matter if belonging to a minority or a majority group, all interviewed professional[1] participants attested having gained new skills during the art residencies and having gained experience and confidence performing in the street. Participants got to acquire new techniques and above all became more experienced in handling positive or negative audience reactions.’

The evaluation also found that the project was effective in challenging racist and discriminatory attitudes. This was true both of the casts of the show and of the audiences:

‘The majority of participants believe they have become more aware of the discriminations faced by the minority.’

A more recurrent change evoked by participants, both amateur and professional, who do not belong to any minority group, is that they discovered the discrimination faced by the MG; many stated they heard stories of discrimination for the first time.

Almost all projects led by artistic NGO included a research phase or intervention during workshops by minority culture experts. This helped a lot to deepen their knowledge about the culture of the minority and to deconstruct all the stereotypes they use to believe in.

‘I was racist before, very racist. Together with my friends we used to play at kicking the asses of sub-Saharan students in the bus (…). In our neighbourhood, there was a black woman who had a restaurant, I never bought a sandwich from her even when I had no choice, because in my head she was dirty because she is black and all black people are dirty (…). After the workshops I went to her restaurant and I ordered two sandwiches.’ Tunisian Young amateur participant, Black Is a Value.

‘Per stakeholders’ opinion, elements of minority experiences and cultural diversity were brought to the attention of national and international audiences in seven countries. Two advocacy projects, namely the National Federation of Amazigh Associations in Morocco and the Mossawa Center in Israel, succeeded – in a very short time – to contribute to the improvement of the cultural conditions of the Amazigh community in Morocco and the Arab citizens in Israel.’

It also found that:

‘The coordination of the DDD project was efficient and appropriate. Stakeholders described the DDD management team as professional, friendly, flexible, easy to reach and available to provide appropriate advice when needed.’

Many of the Recommendations concerned doing more similar work or sustaining the projects for longer as well as focusing on additional pre-programme research and addressing constraints commonly found in the region, e.g. mobility constraints for Palestinians and difficulties in mainstreaming gender.

[1] Refers to someone who has significant experience in performing theatre or a degree in theatre or other relevant field, including but not limited to Street theatre.