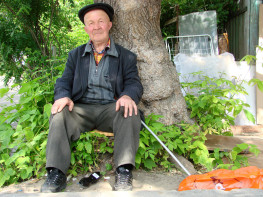 Aim of the programme:

To strengthen the capacity of Civil Society Organizations (CSOs) working with minorities and indigenous peoples to monitor the human rights situation in Russia, and to effectively engage with government stakeholders at the local and national levels.

This project focused on the Council of Europe Framework Convention on National Minorities (FCNM), which the Russian Federation ratified in 1998. The FCNM is the most comprehensive document on minority rights in the international treaty body system and it provides the best systematic monitoring of minority rights in state parties, and provides the most comprehensive platform for accountability. For this reason, the programme ran in tandem with the reporting cycle of the FCNM.

Read about our comprehensive training Global Advocacy Programme of 2009-13 and check out the 12-week course which offered an introduction to minority rights, regional human rights mechanisms and minority rights advocacy.

Minorities and indigenous peoples in the Russian Federation

The development of a federal system that included a number of titular nations as subjects within the Russian Federation was designed to strengthen and preserve the autonomy of specific minority communities groups. However, the majority of ethnic groups are not represented within this structure. Even where they are represented, their relationship with the federal government can often be seen as uneven, making efforts to enhance minority and indigenous rights a complex challenge.

Due to differences in size, settlement patterns and administrative entitlement, minorities and indigenous peoples in Russia face multiple challenges. These diverse challenges can be summarized into four areas:

The Youth Human Rights Movement (YHRM) is a network of people from different countries (at present – more than 30 states) to support each other in defending and promoting human rights values, to share ideas, to arrange joint actions and to form new generation of civil activists.

Below are some links to the publications produced under this programme.

This evaluation examined the efficacy of a programme of capacity building and support in 2013 to 2015 in Russia. The project sought to ensure that internationally accepted human rights standards are implemented in the treatment of both minority and indigenous populations through the country through capacity building and increased awareness of issues. Specifically, the project set out to strengthen the capacity of civil society organizations working with these populations to monitor the existing human rights situation and to engage with government stakeholders at both the local and national levels. The project also worked to increase the awareness of the human rights standards of these communities to key decision makers in order to keep these obligations to the communities at the forefront of their minds.

Ultimately, it was found that the program was highly relevant, as it was consistent with the needs of its beneficiaries. Both representatives of human rights NGOs and minority and indigenous peoples (MIPs) that were interviewed during the course of the evaluation consistently expressed a need to improve the communication and relations between policy makers and MIPs. However, the program effectiveness was limited. While the program resulted in increased knowledge regarding the rights of MIP’s, the new knowledge unfortunately did not translate into the anticipated activities, particularly the joint activities, of the program. The project was also repeatedly undermined by the political climate in Russia, where assumptions about the project rendered MRG trainers unable to obtain entry visas. Furthermore, Russian authorities set out barriers to stop international funding of Russian NGOs, vastly increasing the risk for these NGOs to accept the international funding they needed. A key lesson drawn from this program is that “having strong local partners that have established contacts with the program target beneficiaries is crucial for programme success”.

The Minority and Indigenous Rights in the Russian Federation is funded by the European Union. This content is the sole responsibility of Minority Rights Group Europe and can under no circumstances be regarded as reflecting the position of the European Union