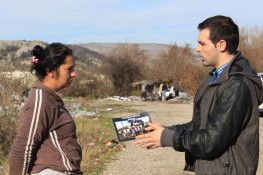 The aim of the project was to reduce discrimination faced by minority communities in Bosnia and Herzegovina (BiH). We aimed to build the capacity of and strengthen networking among minority representatives, civil society organizations, the legal community and relevant socio-economic actors, supporting them to advocate for effective implementation of the anti-discrimination law guaranteeing minority rights.

The word “minority” in Bosnia and Herzegovina is laden with political meaning. The political system of BiH is structured in a way that promotes ethnic domination by territory. According to its Constitution, the country is divided into two main entities: the Federation of Bosnia and Herzegovina (predominantly Bosniak and Croat) and the Republika Srpska (predominantly Serb). The Federation is further divided into ten cantons where usually either Croats or Bosniaks form a numerical majority. The north-eastern district of Brčko, hotly contested during the war in the early 1990s, belongs to neither entity and is under separate administration.

The Constitution of BiH also explicitly differentiates between and assigns different rights to “Constituent peoples” (citizens identifying as Bosniaks, Croats and Serbs) and “Others”. The category of “Others” is used to designate non-constituent citizens of BiH, including national minorities. “Others” are not entitled to stand and vote for certain high offices, seriously hampering their ability to participate and be represented in the political and democratic process. Furthermore, “Constituent peoples” themselves are victims of similar discrimination when they live in the “wrong” administrative entity.

In 2010, the European Court of Human Rights, in the case of Sejdic and Finci v Bosnia and Herzegovina, ruled that the exclusion of citizens not belonging to the three “Constituent peoples” from being elected to the Presidency and the House of Peoples violated Protocol No. 12 and Article 14, taken in conjunction with Article 3 of Protocol 1 of the European Convention on Human Rights. While the decision of the Court prompted a series of high-level meetings and discussions, the government still has not implemented the decision by removing the discriminatory provisions of the Constitution and the electoral law.

Legitimized by the political system itself, ethnic divisions have pervaded all spheres of public life, and the discrimination inherent in the political structure reinforces discrimination against minorities in access to education, employment, health care, housing and other social and public services. Minority returnees and the Roma are the most disadvantaged groups. Minority returnees continue to face ethnic discrimination in public and private employment, and access to health care, pensions and other social services, restitution of property and allocation of reconstruction assistance. Roma, the largest national minority, remains the most vulnerable minority group, subject to widespread discrimination and marginalization.

Who delivered this programme with us?

Human Rights House Sarajevo is an umbrella organization based in Sarajevo aiming to strengthen civil society and democracy by promoting cooperation and coalition building among human rights organizations in BiH. It has been working with over 30 organizations since 1998.

The Serbian Civic Council-Movement for Equality – Sarajevo Canton is the canton office of the Serbian Civic Council which was established in 1994 with the aims of safeguarding a united and multi-cultural BiH and promoting parliamentary democracy and respect for human rights. In 1995, the organization received the Right Livelihood Award http://www.rightlivelihood.org/scc.html. The Sarajevo Canton office, established in 1999, focuses on promoting equality and reconciliation and on supporting the return of refugees and IDPs (Internally Displaced Peoples).

This evaluation assessed this three-year project to legally empower minorities in Bosnia and Herzegovina. The project established over 20 “anti-discrimination points” in community centres and non-governmental organizations around the country and encouraged minorities experiencing discrimination to access legal advice and support.  Staff in local organizations were available at these points to respond to questions from people experiencing discrimination and refer them on as needed. Training was provided to these staff by the project and support was available via fieldworkers who travelled around and visited each ADP periodically.  In a context where a comprehensive Anti-Discrimination Law was in place, the focus of the project was encouraging people to make use of the Law.

The evaluation found that:

“The key idea of the project responded very well to challenges on the ground in BiH. The idea of establishing ADPs matched the needs and perceptions held by the local people themselves. The project has, in other words, tested out in BiH a method used in other countries, and the method has been proven to work.

The majority of interviewed persons agree that the biggest changes have been introduced in understanding of the local communities what is and what is not discrimination. Through ADPs’ activities, round tables, promotional materials and advocacy films many people were introduced to terms and being aware of them could more efficiently fight potential discrimination against them or other people.”

The evaluators were positive about the training provided through the project:

“The trainings and roundtables were organised in logical sequence, adopting the non-formal, competency-based and hands-on approach to skills development, and were sub-divided into the specific units with clearly defined learning objectives, training methodology and performance measurement. Practically all ADPs were attending events, and by being connected with people from government and other institutions and organisations they were able to increase their knowledge on selected topics, but also to present their work to other stakeholders who could further support their work.  …. In conclusion, these trainings and round tables were highly efficient and appreciated by the training participants coming from ADPs.”

The evaluators commented on the gender mainstreaming aspects of the project:

“It is very different in various targeted communities, but in general terms participation of women was above 50% and much higher than it might be expected in BiH and specifically in the case  of Roma patriarchal society. Based on the interviews with women, it was found that participation in activities not only provided the women with some basic leadership qualities, but also acted as a catalyst for communities to gradually open up to the idea of women being leaders.”

“The project aimed at working with all members of minority communities facing discrimination in the country including “others” (i.e. the non-Bosniak, Serb or Croat citizens of BiH, encompassing 17 national minorities) as well as the “constituent peoples” (Bosniaks, Croats and Serbs) who experience discrimination when they live in the “wrong” administrative entity. Still, the majority of project efforts were focused on Roma population, with a second prong focussing on the Jewish community.

The discrimination faced by members of minority communities is still widespread and can affect all aspects of their lives including accessing services like health and education, employment opportunities as well as public participation. … The project especially aimed to further the human rights of BiH’s Roma population, and by doing so the project was clearly highly relevant from the point of view of beneficiary need. The Roma are both the largest and most vulnerable ethnic group in BiH who have experienced increasing marginalisation and a deterioration of their overall wellbeing since the end of the Bosnian war in 1995.”

The evaluators commented on the desirability of similar work continuing, some coordination and communication difficulties between partners and some inflexibility on the part of the EU in relation to partnership issues (when issues external to the project challenged one partner).

Read a briefing produced under the programme: Collateral Damage of the Dayton Peace Agreement: Discrimination Against Minorities in Bosnia and Herzegovina, Twenty Years On

Watch a series of videos documenting the everyday challenges faced by Roma in Bosnia and Herzegovina.

Photo: Providing information on right to housing to members of the ADA Roma community in Čapljina, Bosnia and Herzegovina