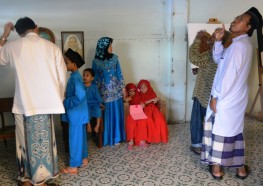 The programme is being delivered in the marginalised southern provinces of Thailand, where the majority of the population belong to the ethnic Melayu-Muslim minority. Decades of conflict between the Thai state and ethnic Malay separatists in the region have resulted in tensions between Melayu-Muslims and ethnic Thai and Chinese communities.

Thailand’s government has exacerbated the conflict through decades of repressive policies that have aggressively promoted a narrow ‘Thai’ identity at the expense of local communities. Melayu-Muslim residents experience discrimination in areas such as language and religious education.

Networking meetings and trainings for community-based organiszations representing marginalised groups in the south of Thailand.

These meetings aim to strengthen networks of these organizations to share information and promote united advocacy for issues of concern. Both majority Buddhist and minority Melayu-Muslim representatives will be invited. The training focuses on peace-building, advocacy and governance and accountability, as well as organizational leadership.

We have coordinated with the network of CSOs to make joint stakeholder submissions to Thailand’s Universal Periodic Review – this is a key opportunity for the local CSOSsrepresenting diverse communities to engage in united advocacy on issues of concern.

Dialect So-So and Fatoni in My Memory – documentary films on peace and reconciliation in Thailand’s deep south
Many Thai citizens know little about the real experiences of people in Thailand’s Southern Border Provinces. The region has been plagued by a simmering violent conflict since at least 2004, yet mainstream media in Thailand has often presented a simplified and even biased picture of events. To address such misrepresentation of the issue, MRG, in conjunction with IDIO Films and Fatoni Films, present two short documentaries that tell the real stories of people living in Thailand’s deep south.

The short documentary ‘Dialect So-So’ tells the real stories of people living in Thailand’s deep south. It highlights the success of the Thai-Chinese-Buddhist minority in finding dialogue and peace with their Malay Muslim neighbours at times of continuing insurgency and conflict in the area and despite their profound cultural and religious differences.
Watch the full film

The short documentary ‘Fatoni in My Memory’ explores ideas of historical injustice, especially the destruction of the region’s cultural artefacts by the Thai state, and traces them to the modern day conflict that continues to wage unabated between a separatist movement and the Thai state authorities.
Watch the full film

Who is delivering this programme?

MRG is implementing this project in partnership with People’s Empowerment Foundation (PEF), which works to promote a wide range of human rights and human security issues throughout Thailand and Southeast Asia. PEF serves as a civil society network through which community-based partner organizations share knowledge, strategies, and resources to work together for positive social change.

The evaluation report found that the project was largely successful. The aim of the project was to build CSO capacity to feed community views into and ensure wide rights-based community support for the ongoing peace process. The report found that capacity gains were made but that very slow or stalled progress in the peace talks, plus the very closed and unparticipatory nature of the talks meant that opportunities for CSOs to be engaged, influence or support them were lacking:

In terms of what was possible for this project to achieve in the present context, the project achieved its specific objective of building the capacity of Thai CSOs to mobilise their communities to work together to begin to increase their participation in reconciliation and decision making but their actual participation in peacebuilding is still in the future.

Despite the adverse context, the evaluation found that:
Reports from grantees, MRG and PEF, other documents, and key informant interviews all verify that everyone perceived the major benefit of this project to be capacity building for the grantee CSOs and their communities in a wide variety of ways including skills in management, finance, media, English language and human rights.

Recommendations included
– Increasing CSOs interactions with and claims made to the Thai authorities in the SBP.
– A higher focus on gender and funding a gender-specific project would have added value
– Future work could involve longer-term and more holistic interventions involving authorities, CSOs, communities to improve communication and start building trust utilising a rights-based approach which respects and values Thailand’s diverse communities.