Minority Rights Group > News > Past Programmes and Evaluations > Pakistan: Promoting tolerance through the arts – Minority-driven theatre and storytelling for youth

Pakistan: Promoting tolerance through the arts – Minority-driven theatre and storytelling for youth 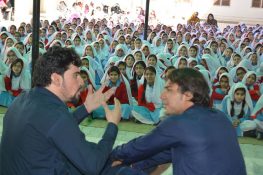 Location: Pakistan (with a focus on Quetta, Baluchistan)

This programme used arts to inform and increase engagement of young people in Pakistan in public discourse about tolerance towards minorities, and respect for diversity. Local actor-activists used storytelling and theatre to lead performances and discussions in schools, and young people were supported to create their own creative outputs exploring these themes. Showcases of the young people’s work facilitated advocacy with local, regional and national authorities to promote effective, responsive and accountable governance to protect minorities in Pakistan.

Ethnic and religious minorities in Pakistan face increasing levels of discrimination and this is consistently reflected in the educational system. The use on non-inclusive curricula promotes a representation of Pakistani identity that leaves little space for creating a constructive dialogue based on tolerance and diversity. While curricula are formulaic in their orientation and educational approaches tend to emphasise memorisation, storytelling was identified as a new and powerful way to raise awareness on minority rights through the direct engagement of young activists, teachers and students.

While storytelling itself has a long history in what is modern day Pakistan, the programme employed a new, inclusive devising process to create drama productions based on the students’ own experiences. Minority rights activists used these creative strategies to fight prejudice and engage young people directly in the debate.

Through the training provided by the implementing partner, local minority rights activists learnt to use storytelling and drama techniques and applied their skills to their work with young people in the schools targeted in Quetta.  Students have been encouraged to share their perspectives and convey messages of tolerance, understanding and peace while participating at the development of the drama productions. The engagement of teachers in the creative process helped them address diversity issues, teach minority rights, and use storytelling-based education to tackle sensitive societal issues with students. Particular attention was given to promoting gender equality both among the actor-activists, the students and teachers involved in order to address specific issues faced by minority women in Pakistan.

The impact of the project extended to the wider society who attended the performances and to decision makers through advocacy events. Common objective of these events was to share the experience and good practices from the programme and to stimulate discussion on the role of arts, and specifically drama/storytelling as instruments to build tolerance and respect for cultural diversity among Pakistani youth.

Due to the impact of the Covid-19 pandemic on the programme activities, we took the difficult decision to cancel the final evaluation of the project­ – due to take place in April 2020 – as we did not feel this could be meaningfully completed.

Who delivered the programme with us?

Filed Under: Asia and Oceania, Pakistan