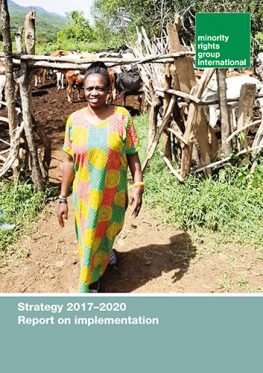 At the commencement of our 2017-2020 strategy there were serious threats looming for minority and indigenous communities worldwide. The ensuing period has been characterised by election of mediocre politicians with limited integrity and abilities to the helm of powerful States, on platforms advocating hate against minorities in a bid to generate artificial majorities to sweep them to power. Democratic institutions built on principles of the rule of law, democracy and human rights, seemed unable to withstand this pressure. The global commitment to increased inclusion, (to ‘Leave No One Behind’) rang particularly hollow.

Goaded by anger stemming from job losses as technology ate into labour markets; the concentration of wealth in few hands and their ability to seize control of the State, what followed was a significant deterioration in resilience, inclusivity and societal cohesion. In this febrile atmosphere being ‘different’ was dangerous, especially if that difference arose on the basis of ethnicity or religion, forming a lethal cocktail when combined with longstanding misogyny. The period was also characterised by significant advance of climate change creating new victims as societies proved unable and unwilling to adapt from a carbon-based economy.

Adversity can bring people closer to collaborate in collectively overcoming looming threats. But active narratives of hate were created and launched, fragmenting populations and birthing ferocious, exclusionary and incompetent politics. The inability and unwillingness to strive for more equal societies while countering the climate threat was palpable. Imagined threats stemming from diversity were deemed more serious than real threats from already apparent climate shifts. Benefits to those in power from the status quo consistently outweighed voices calling for better, more equal and sustainable ways of life and politics.

Rather than bringing communities together and drawing the best talent to combat adversity, a politics of mass distraction swept country after country. Seething majoritarian anger caused by economic failure, was channelled against minorities and indigenous people least to blame for unemployment or unjust enrichment, and least culpable for forces accentuating climate change. Their targeted scapegoating through fake news and/or unsubstantiated opinion generated artificial majorities – emphasizing ‘threats’ to ‘traditional values’ ‘nationhood’ or ‘stability’. This hollowed out societies as majoritarian wrath and frustration was pitted against minorities. The battle benefitted emergence of a new ruling class claiming to act in the name of the many, while serving the few – themselves included, from the confines of government.

When the pandemic arrived it found a compliant host: under-skilled governments, crumbling health infrastructure and fragmented societies. A lethal cocktail of governmental ineptitude, polarized societies, and a politics of deceit, combined with long-standing divestment from public health, unleashing the power of nature hitherto believed conquered and confined to history by advancement in science and technology. All the while in the background the looming climate crisis drew ever nearer.

These events broke minority and indigenous communities and even entire countries. Minorities were vastly overrepresented in hospitalisation and fatality figures due to overexposure, lack of proximity to healthcare, in some cases poorer general health due to poverty, and overrepresentation in the frontline of care and essential services – features of minority lives depressingly familiar to MRG but rarely discussed until now. The lives lost and communities dismembered should not be forgotten and a forensic accounting of this chapter of history is a must, if only to ensure against creation of adequate safeguards against recurrence. It is equally important to underscore the premium that skill and integrity in governance brings and to push back against populist politics driven by hate.

At the time of writing the hope nurtured by effective vaccines against the pandemic was becoming undermined again by a failure to ensure global reach and distribution. In India, self-claimed ‘apothecary of the world’, the attempt to extend the reach of populist politics re-plunged the world into insecurity, with bodies floating in rivers becoming a sad indictment of the poor state of humanity.

The challenge of building back better is upon us. We must ensure that minorities and indigenous peoples are not left behind in this process and that they are full active participants in a shared future, not factors to be accounted for. The fight for that future must be visionary and strategic– learning from the past without becoming overwhelmed by the scale of suffering, nor driven by desire for vengeance against those responsible for it.

Through these four tough years donors’ support for our work has been unwavering. It enabled us to stretch our reach to those farthest behind and respond when communities reached out. In many instances we provided communities under siege with short term relief while supporting their journey towards realisation of their vision of an inclusive future. We reached many in the frontline of this battle even though we are not a humanitarian organisation and the unrestricted nature of SIDA’s support enabled us to react to the challenges presented to minority communities and indigenous peoples.

Combatting religious persecution in this era of hate proved challenging as envisaged, especially in the unequal race minorities and supporters of free and fair societies face against those seeking to seize and maintain their hegemony on power through divisive politics. Galvanizing minority and indigenous communities as they seek to overturn narrow identity-based politics has been a privilege and learning experience for us. We witnessed and were inspired by communities in extreme unprecedented difficulty who remained relentless in pursuing a persecution free society. We ostensibly helped them, but they helped us learn ways and values as we sought ways to link them with each other in the collective fight.

The period reinforced our dedication to the Leave No One Behind principle. The pandemic’s central message was: we will all be worse off as long as some of us are threatened. Despite the setbacks of identity-politics we see real signs of the greening of the desert – where human spirit and solidarity cut across political divide and rhetoric in friendship and empathy. Your support enabled us to design creative programmes mainstreaming key people-oriented Sustainable Development Goals, to eliminate poverty, hunger and gender bias, while spreading opportunities for good education and quality health care to reach those farthest behind. We grasped the challenge of engaging the public more directly in advocacy and reoriented our own internal architecture to ensure we are able to respond to the growing demand for the work we do.

Our 2021-2024 strategy was launched after significant discussion with our global partner communities and a wide range of individuals and institutions who work for the cause of minorities and indigenous peoples globally. The evaluation of SIDA’s support for MRG reached hundreds of individuals playing a central part of this process. Rather than radical change, our strategy builds on existing work, seeking to accentuate and sharpen its impact and reach by adding new tools and elements as we deepen our commitment to communities struggling for better human rights and development opportunities. The recognition of a specific objective on climate justice acknowledges the specific need to influence this ongoing work, but to work upstream in underscoring its impact on minority and indigenous communities with a view to recalibrating systems to ensure our communities’ visions, aims, tools, knowledge and impacts are factored into the work of those working for sustainable development.

The half century of our organisational history underscores the limitations of human rights based approaches not focused on the most vulnerable. We have challenged ourselves over what structural discrimination means in our own response to the #BlackLivesMatter call and have emerged determined to ensure that we continue the struggle to realise the inherent dignity and worth of every individual. Our advocacy flows against the grain of the time in an era of populism. Yet we are not only refreshed and energised for this fight, we realise how important public advocacy and education are if a brighter future is to dawn upon us all.

Cover photo: Christine Kandie, a disability rights activist from the Endorois community in Kenya, raising awareness about COVID-19 to her rural communities.