A Quest for Equality: Minorities in Turkey (December 2007) 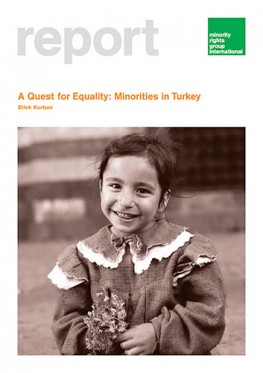 Though Turkey is a land of vast ethnic, linguistic and religious diversity – home not only to Turks, Kurds and Armenians, but also, among others, Alevis, Ezidis, Assyrians, Laz, Caferis, Roma, Rum, Caucasians and Jews, the history of the state is one of severe repression of minorities in the name of nationalism.

The only protection for Turkey’s minorities is that set out in the outdated 1923 Treaty of Lausanne, which acknowledges only non-Muslim minorities. Turkey has violated the Treaty since its adoption, not least by restricting its scope to Armenians, Jews and Rum (Greek Orthodox).

Excluded minorities have been banned from using their languages and from exercising their religious rights, or subjected to policies aimed at homogenizing the Turkish population and destroying minority languages, cultures and religions.

This report sets current law and practice in Turkey against the backdrop of equivalent international standards on linguistic rights of minorities; freedom of religion, thought and conscience; freedom of expression; freedom of assembly and association; political participation; property rights and anti-discrimination. It considers the impact of the EU accession process, showing that though Turkey’s attitude to minorities has changed for the better over the past 6 years, much more remains to be done.

Will Turkey continue its path of reform or opt for further repression of its centuries old heritage? After hundreds of thousands of Turkish people took to the streets in January 2007 to protest the killing of Hrant Dink, a Turkish-Armenian journalist, this report highlights the importance of this moment in Turkey’s history – a moment that, for the sake of equality for the country’s centuries-old minority communities, must not go to waste.