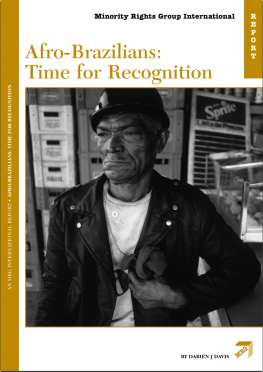 How is it that Afro-Brazilians have shaped so much of Brazilian culture yet remain politically and economically disenfranchised? This is the central question posed by this MRG report, published to coincide with the 500th anniversary of the arrival of the Portuguese in Brazil.

Many will not be joining in the celebrations but reflecting on the consequences of colonization for the land and peoples whom the Portuguese forced into bondage – in particular, the descendants of the millions of African slaves uprooted from the African continent and brought to work in one of the largest slave economies of human history. The myth that Brazil is a ‘racial democracy’ remains a powerful one. It is a myth that this Report seeks to challenge.

The Report also gives a history of the evolution of civil rights in Brazil, discusses the contribution of Afro-Brazilians to Brazilian culture and describes the work of the many Afro-Brazilian organizations which are working to raise awareness and inform people of their rights. It forms a timely contribution to the debate as to how far Brazil needs to go to meet the needs and aspirations of all its citizens.