Minority Rights Group > Publications > Briefings > An uncertain future for Syrian refugees in Lebanon: The challenges of life in exile and the barriers to return

An uncertain future for Syrian refugees in Lebanon: The challenges of life in exile and the barriers to return 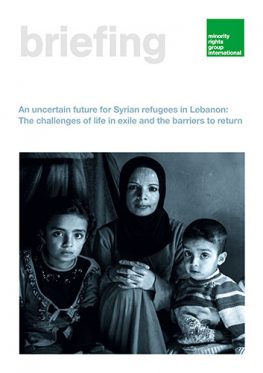 The impact of the eight-year long Syrian conflict has been felt by millions of civilians forced into exile from their country. For the estimated 1.5 million Syrians in Lebanon, life has largely continued in a state of limbo, with some longing to return home while others wishing to remain out of fear of persecution back in Syria. In either case, the majority are still caught in a precarious existence and in desperate need of stability, security and basic services. An uncertain future for Syrian refugees in Lebanon: The challenges of life in exile and the barriers to return explores the situation of the Syrian refugee population in Lebanon today and the difficult choices that lie ahead of them, as well as the complex effects of their presence on Lebanese politics and the country’s delicate communal framework.

While Lebanon, with the highest per capita refugee population in the world, has played a vital role as a sanctuary for displaced Syrians, many refugees have also suffered excessive use of force, limitations on freedom of movement and various other forms of discrimination, ranging from curfews to evictions. Though it has so far managed to avoid an outbreak of large-scale sectarian conflict, the most effective step to ensure the current crisis in Lebanon does not create further violence is to promote an inclusive and rights-based strategy towards the refugee population. The international community has an important role to play in ensuring Lebanon can continue to provide its large refugee population with security, humanitarian assistance and more broadly a place within Lebanese society to allow them to live with dignity and meaning until such a time as safe, voluntary return to Syria is possible.

In Syria, meanwhile, given the regime’s tight control of public expression and opposition, the likelihood of either a vibrant civil society movement or a progressive government approach towards the reintegration of returning refugees remains slim. Yet the long-term future of the country could depend to a considerable extent on the extent to which, in the coming years, any process of return is undertaken freely and safely, with all possible measures in place to enable those displaced since the beginning of the conflict to return to their homes.