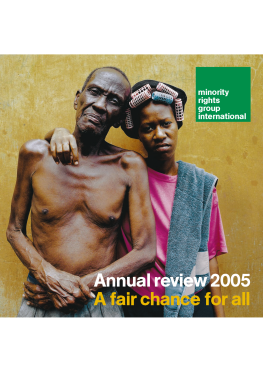 Threats to the rights of minorities and indigenous peoples around the world remained undiminished in 2005. Grave human rights violations continue. Entrenched discrimination means that, in many parts of the world, minorities remain the poorest of the poor and yet are denied access to justice or to development opportunities to enable them to challenge their discrimination and break out of long-term cycles of poverty. And, as the global security agenda retains its focus on the ‘war against terror’, many governments are taking the opportunity to clamp down on the rights and freedoms of their minority communities.

Minority Rights Group International (MRG) is a unique global voice for the rights of minorities and indigenous peoples. In the face of these challenges we need to think carefully how our limited resources can be deployed to the greatest effect. Following extensive consultation and research, we agreed a new four-year strategy, starting from 2005, concentrating efforts on where our contribution can make the most difference.

Achieving lasting improvements in the lives of minorities and indigenous peoples on the ground is our priority. Our campaigning will be driven by specific goals, including education reform, protecting land rights and countering discrimination against minority women. In order to help protect minorities and indigenous peoples from human rights violations, a greater focus will be placed on action at the level of national governments, including by using international law. Improving our ability to monitor changes in the situation of minorities around the world and to respond to crises, MRG will seek to raise the profile of minority rights among international policy-makers and in the key national and international media.

MRG is committed to working with our partner organizations to counter the prejudice faced by their communities, and to promote social justice and appropriate development. We believe that promoting cooperation between communities contributes to the creation of more stable societies that are more able to negotiate tensions between groups without resorting to violence. And we will increase our work to promote the recognition of minority rights as a key tool in the prevention of conflict. The coming period is also a time of opportunity. Whether it is in the development of new regional institutions for Africa, the accession process of the European Union, the readiness of major development donors to implement a human rights approach, the establishment of institutions of international justice, or an agenda for positive United Nations reform, there are major opportunities to influence international change in a way that will bring improvements to the lives of minorities and indigenous peoples on the ground.

This annual review highlights the key themes in our work in 2005 and for the next three years. We believe that more people should have the chance to live free from racism, on equal terms with their neighbours, without fear of violence, and without their education or future being blighted by discrimination. We believe in a fair chance for all.