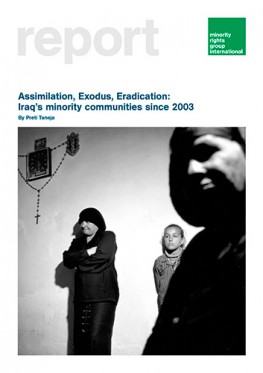 Since the US-led coalition forces ended Saddam Hussein’s Ba’ath party rule in 2003, the civilian population in Iraq has been subject to escalating violence. For Iraq’s minorities, the consequences of the war have been particularly grave. Their assimilation, exodus and eradication from Iraq means some communities – many of whom have been present in Iraq for millennia – may be permanently lost from the region.

Caught between the warring factions, Iraq’s minorities have become the targets of violence including murder, abduction, torture, rape, and intimidation. Religious buildings, businesses and homes have been destroyed. Discrimination and exclusion from political participation – a feature of Saddam Hussein’s regime – persist today in Iraq’s fledgling democratic processes.

This report sets out in stark terms, the plight of Iraq’s minority communities post-2003, and makes an urgent plea to the Iraqi government and international community to take action to protect these vulnerable groups, or to risk their disappearance from their ancient homeland forever.

‘The excellent report of Minority Rights Group International entitled Assimilation, Exodus and Eradication: Iraq’s minority communities since 2003… draws a very dark tableau of the passage of the human rights situation of these minorities.’
Ablahad Astepho, Director of the Assyrian Institute of Europe, in a conference held at the European Parliament