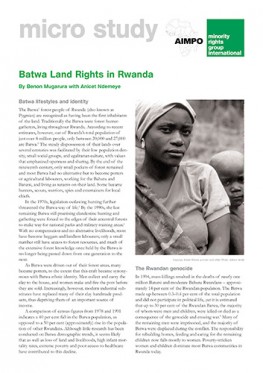 The Batwa forest people of Rwanda (also known as Pygmies) are recognized as having been the first inhabitants of the land. Traditionally the Batwa were forest hunter-gatherers, living throughout Rwanda. According to recent estimates, however, out of Rwanda’s total population of just over 8 million people, only between 20,000 and 27,000 are Batwa. The steady dispossession of their lands over several centuries was facilitated by their low population density, small social groups, and egalitarian culture, with values that emphasized openness and sharing. By the end of the nineteenth century, only small pockets of forest remained and most Batwa had no alternative but to become potters or agricultural labourers, working for the Bahutu and Batutsi, and living as tenants on their land. Some became hunters, scouts, warriors, spies and entertainers for local chiefs.

This study explores the dispossession of Batwa land in Rwanda.