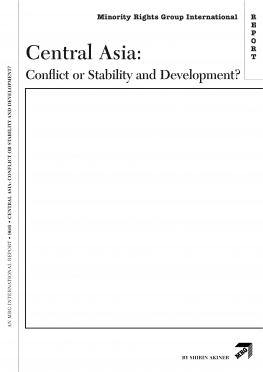 The states of Central Asia – Kazakstan, Kyrgyzstan, Tajikistan, Turkmenistan and Uzbekistan – contain a variety of ethnic groups. With the collapse of the Soviet Union, these states suddenly received independence and all were faced with a painful process of readjustment to the new realities. The situation of many minority groups remains in the balance.

Central Asia: Conflict or Stability and Development? examines the features common to all the Central Asian republics, while discussing their individual characteristics. The Report goes on to look at the critically balanced social, economic and environmental conditions and identifies potential causes of regional conflict and stability.

The author, Shirin Akiner, provides a broad history of the region, an ethnic survey of the main minority groups in the five states and a consideration of the role of Western aid in the region’s development. Finally, the Report highlights the outlook for minorities in the newly-independent Central Asia in a time of great transition.