Minority Rights Group > Publications > Inequality and the impact of Covid-19: How discrimination is shaping the experiences of minorities and indigenous peoples during the pandemic

Inequality and the impact of Covid-19: How discrimination is shaping the experiences of minorities and indigenous peoples during the pandemic 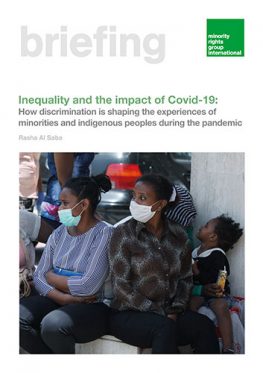 The Covid-19 outbreak was declared a pandemic by the World Health Organization (WHO) on 11 March 2020. It had initially spread in Wuhan, China in late 2019, before the first cases outside the country were recorded at the beginning of 2020. Today there are millions of cases of Covid-19 globally, with thousands of new cases being confirmed every day. The Covid-19 pandemic is, at root, a public health emergency, driven by its ready transmission and ability to cause severe illness and death. But while its ability to overwhelm the best of health systems has already been demonstrated, its far-reaching social, economic and political consequences are still unfolding.

Although everyone is at risk of the virus, some groups have been worse affected by the pandemic and its consequences, including in particular minorities and indigenous peoples. Especially in the global north, mounting evidence has shown that ethnic, racial and religious minorities are not only at greater risk of contracting the virus for a wide range of reasons – from their disproportionate employment in high-risk sectors such as nursing, cleaning and public transport to their concentration in overcrowded housing where social distancing is more difficult – but can also face higher rates of mortality once infected, often due to limited access to medical care. Linguistic minorities may face problems in accessing accurate public health advice. While there is so far less data available on the impact of the pandemic on indigenous peoples, particularly smaller or more isolated communities, emerging evidence from the US and elsewhere suggests that the implications of the pandemic have been ‘disproportionately devastating’ for indigenous peoples.