Minority Rights Group > Publications > ‘Erasing the Board’: Report of the international research mission into crimes under international law committed against the Bambuti Pygmies in the eastern Democratic Republic of Congo

‘Erasing the Board’: Report of the international research mission into crimes under international law committed against the Bambuti Pygmies in the eastern Democratic Republic of Congo 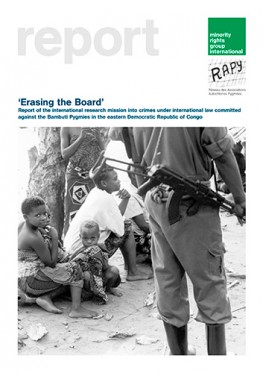 War crimes and crimes against humanity, including persecution, murder, forcible population transfer, torture, rape and extermination, have been committed against the Bambuti Pygmies in the eastern Democratic Republic of Congo (DRC). These crimes have taken place since the start of the second war in 1998 and continue up to the present. Bambuti communities remain at grave risk.

The atrocities have been committed in the context of a war which has cost over 3.3 million lives through violence and conflict-related starvation and disease. Over 60,000 people have been killed in the north-eastern district of Ituri alone, according to United Nations estimates. The involvement of neighbouring states in the conflict, including Rwanda and Uganda, has been justified by them on security grounds, but is also directed towards the large-scale plunder of the DRCfs natural resources, including gold, diamonds and other minerals.

This report details evidence of crimes committed against the Bambuti and makes a series of recommendations for advancing justice and preventing further violence.