Fiji: The challenges and opportunities of diversity 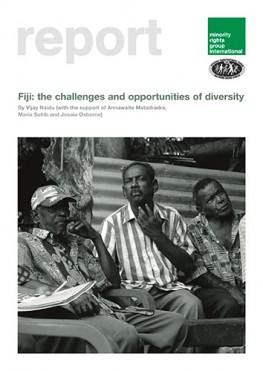 Fiji has experienced four military coups and a military mutiny since 1987, mainly as a result of tension between the majority indigenous Fijian population and an economically powerful Indian minority. Smaller minorities, including Banabans, Rotumans, Chinese, Melanesians and other Pacific islanders are largely politically invisible, and socially and economically excluded.

In January 2013, Fiji’s government rejected a draft constitution drawn up by an independent commission, and submitted it to be re-written by the Attorney-General’s office. This intervention threatens to significantly undermine the people’s confidence in the process, the final document and a democratic future for Fiji. Against the backdrop of these upheavals, this report provides insight into the underlying causes and consequences of ethnic tensions in Fiji, based on evidence drawn from extensive interviews across the diversity of Fiji’s ethnic groups.

This report urges the government, civil society and religious and ethnic community leaders to promote understanding, tolerance and dialogue between groups. It also provides specific recommendations on tackling ethnic discrimination and exclusion.

Read more about the research approach and methodologies here.

Filed Under: Asia and Oceania, Fiji