Five essential elements for a long-term solution for Kosovo 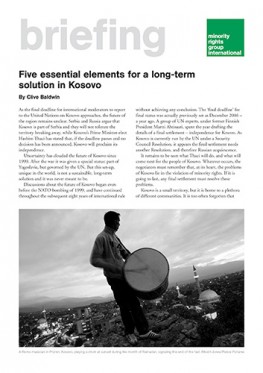 The violation of minority rights lies at the heart of Kosovo’s problems. A settlement for the region must allow for minorities to practise their language, religion and culture freely if further ethnic violence is to be avoided.

The great failing of international rule in Kosovo over the last eight years has been that instead of breaking down segregation it has made it worse. Kosovo has become ever more divided into Albanian and Serb areas, with all other groups being marginalized.

Kosovo is a small territory, but it is home to many different communities. It is too often forgotten that Kosovo’s inhabitants include not just Albanians and Serbs, but also Roma, Turks, Ashkalia, Egyptians, Bosniacs, Gorani and Croats. All groups have suffered, and continue to suffer in Kosovo, wherever they are a minority.

According to the briefing, which draws on both MRG’s ongoing work in the region and extensive experience of similar situations worldwide, any further delay on a final status settlement may lead to more ethnic cleansing. The past shows that at times of great tension unprotected minority communities come under attack, as was the case in 2004 when many of the remaining Serbs and Roma in Albanian majority areas in Kosovo were driven out.