Forgotten or Assimilated? Minorities in the Education System of Turkey (March 2009) 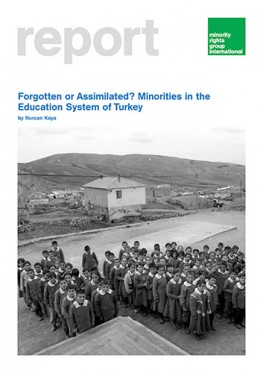 Since the Turkish Republic was established in 1923, minorities have been perceived as a threat to the ‘indivisible integrity of the state with its territory and nation’ enshrined in the Turkish Constitution. This has had a grave impact on generations of minorities in accessing their fundamental rights in Turkey, including their education rights.

Many members of minority communities feel that the Turkish education system works to assimilate them. Turkish identity and nationalism are promoted as fundamental values while distinct minority cultures, history and religions are ignored. Because of the discrimination, harassment and humiliation that children from minority communities face, they often hide their ethnic and religious identities.

While Turkey has ratified many relevant international treaties, it has put reservations on provisions that are relevant to minorities’ rights, and their right to education. The European Union accession process has had some positive impact the education rights of minorities in Turkey, but much remains to be done.

Many teachers and workers in minority NGOs have been interviewed for this report, which looks in detail at the issues of language, religion and discrimination in education. It concludes with a series of detailed recommendations for the Turkish government and the EU.