Minority Rights Group > Publications > From Crisis to Catastrophe: The Situation of Minorities in Iraq (October 2014)

From Crisis to Catastrophe: The Situation of Minorities in Iraq (October 2014) 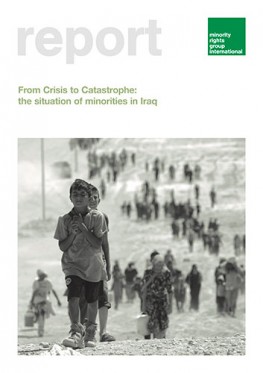 In the first nine months of 2014, over 12,000 civilians have been killed in Iraq, and religious and ethnic minorities have been among the primary targets. In areas controlled by the Islamic State of Iraq and Al-Sham, minorities have been subject to summary executions, forced conversions, kidnappings, torture, sexual violence and destruction of property. At least half a million have been forced to flee their homes and lands in Ninewa with little more than the clothes on their backs.

However, 2014 did not mark the beginning of the crisis for Iraq’s minorities. For years they have been victims of assassinations, torture, kidnappings, armed robberies, and bombings targeting their religious rituals. Since minorities generally do not have their own militias or tribal protection structures like the majority groups in society, they are especially vulnerable. The federal government of Iraq has shown that it is either unable or unwilling to protect the safety of minorities. In the vast majority of cases, investigations are not properly conducted and the perpetrators of attacks go unpunished, often with indications of official complicity.

The situation of minorities in Iraq has now reached the point of desperation. Many communities have been reduced in size by emigration and killing to the point that they are now in danger of extinction in Iraq. Villages in Ninewa governorate that have been home to minority communities for thousands of years have been all but emptied of their inhabitants. Across Iraq, the minorities who do remain live in constant fear for their safety. Their religious sites are the target of attacks and they are afraid of openly displaying their religious identities. Their areas suffer from deliberate neglect and they face high barriers in accessing education, employment, housing, healthcare and other essential services.

This report seeks to give a comprehensive picture of the current situation of minorities in Iraq. Recommendations include urgent measures:

All parties to the conflict should abide by international humanitarian law and should prohibit any aerial bombardment or other attack expected to result in a disproportionate loss of civilian life.