The cost of hate speech: Policy brief for Punjab 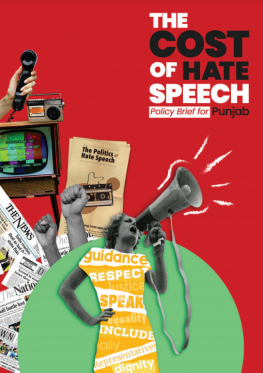 Pakistan is a religiously diverse country. Since its inception in 1947, it has been facing issues of intolerance and hate speech. Despite all legal provisions against hate speech, it has been allowed to flourish with impunity in practice. Hate speech in textbooks, print and electronic media including in sermons delivered through clerics have torn the social fabric of our society.

Pakistan ratified the International Convent on Civil and Political Rights (ICCPR) in 2009. Laws relating to hate speech exist in Section 505 (2) of the Pakistan Penal Code (PPC) that makes creating or promoting “feelings of enmity, hatred or ill-will between different religious, racial, language or regional groups or castes or communities” punishable. These legal provisions cover firmly the offenses identified as hate speech in the article 19 and 20 of ICCPR. Thus, the existing legal framework of Pakistan provides ample space to government to take action against hate mongers.

After the terrorists’ attack in 2014, at the Army Public school in Peshawar, a National Action Plan (NAP) was formed to counter terrorism in the country. Among 20 points within this NAP, the fifth one focused on “Strict action against the literature, newspapers and magazines promoting hatred, extremism, sectarianism and intolerance”.

Unfortunately, despite all these legal provisions against hate speech, little has been done in practice. On December 27, 2014 an Ahmadi, Luqman Ahmad, was shot dead in district Gujranwala after a Muslim leader denounced Ahmadis on a popular television show. On December 30, 2014 the television apologized for its editorial negligence. The assassination of the former Governor of Punjab, Salman Taseer, reminds us of a campaign of hate speech that was carried out against him and the announcement of a bounty to incite his murder. Members of religious minorities are facing the issue of hate speech constantly.

Terrorism has deep roots in hate crimes. In the context of Pakistan, it is urgently needed to implement the existing laws regarding hate speech. I pay homage to all staff who have contributed to bring this research to publication and hope it will stir the still waters of negligence and facilitate policy makers to carve a vibrant policy to counter the hate speech swelling rapidly in our society.