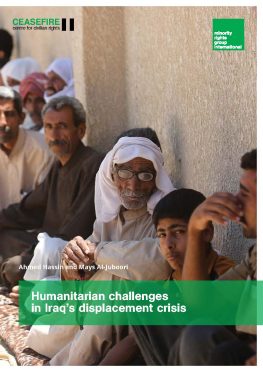 There are currently more than four million internally displaced persons (IDPs) in Iraq. Many remain in a state of profound insecurity, at risk of arbitrary detention or attack not only from the Islamic State of Iraq and al-Sham (ISIS) but also from Iraqi Security Forces, Shi’a militias, Kurdish forces and other actors. As significant numbers of IDPs try to return to their areas of origin, fresh waves of displacement from Mosul and elsewhere are taking place.

IDPs continue to face harsh and even life-threatening conditions as Iraq’s conflict continues. Many are without access to adequate food, shelter and essential services such as health care, water and sanitation, particularly those trapped in remote or conflict-affected areas. Women, children and persons with disabilities are especially vulnerable. Education remains inaccessible or unaffordable for many, with an estimated three million children out of school as a result of conflict and displacement.

While authorities have struggled to provide adequate protection and assistance to a large number of IDPs, their vulnerability is further exacerbated by restrictions on freedom of movement imposed by Iraqi and Kurdish security forces. IDPs routinely suffer discrimination on the basis of their ethnic or religious identity. Sunni IDPs, for example, are frequently denied entry to Baghdad on the assumption that their numbers may include ISIS sympathizers.

Returnees face considerable risks as numerous homes and neighbourhoods have been booby trapped by retreating ISIS fighters or still contain explosive remnants of war (ERW). Despite these dangerous conditions, authorities are encouraging IDPs to return without raising adequate awareness about the potential threats or ways to minimize them. As a result, deaths and injuries have already been reported among returning  IDPs.