Minority Rights Group > Publications > Identity and Citizenship in Tunisia: The Situation of Minorities after the 2011 Revolution

Identity and Citizenship in Tunisia: The Situation of Minorities after the 2011 Revolution 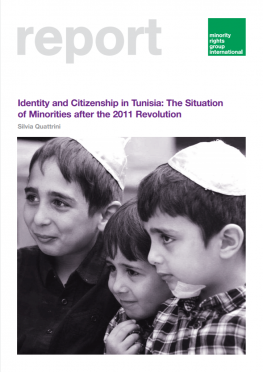 Since the overthrow in January 2011 of the authoritarian President Zine El Abidine Ben Ali, widely credited as the beginning of the Arab Spring, Tunisia has successfully established a functioning democracy and taken a number of positive steps to promote human rights in the country, including the drafting of the progressive 2014 Constitution. This has been followed by a number of other legislative changes that have benefitted its minorities, including the passage in October 2018 of a law criminalizing racial discrimination.

Despite these encouraging developments, many communities continue to contend with the legacy of years of discrimination. This includes not only unrecognized religious minorities such as Bahá’í and converts to Christianity, who face significant restrictions on their ability to worship freely, but also the country’s indigenous Amazigh population who, through a long process of assimilation, have been sidelined. The same is true of the country’s black population: long marginalized in the country, they are still subjected to racial discrimination.

This report, Identity and Citizenship in Tunisia: The Situation of Minorities after the 2011 Revolution, documents Tunisia’s achievements to date and also the significant rights gaps that many Tunisians, including its minority and indigenous populations, face. Drawing on interviews with community representatives and activists, as well as an extensive review of the available literature, legislation and media coverage, it explores the extent to which the Jasmine Revolution and the country’s subsequent democratic transition has benefitted and included its minorities.