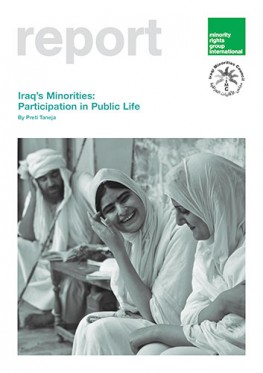 Taking part in everyday public life – practising religion, accessing jobs and public services, taking part in politics, travelling freely – is a challenge for many people in Iraq, but members of ethnic and religious minorities face particular obstacles. They may feel that they have to hide their identity when they leave the house. When they go to public bodies to access services, they fear that their identity will be revealed, and services will be denied to them. Minority women are particularly vulnerable to abuse and are subject to violence and discrimination both because of their sex and their minority affiliation. In a country where getting a job or public services often depends on which political party you belong to, minorities often feel that if they join their community’s own party, they will lose out.

This report is based on the findings of original field research, for which over 330 members from 11 minority communities were interviewed. It focuses on the Kurdistan Region; Diyala, Kirkuk and Nineveh in the north; Baghdad, Babil and Basra, given the concentration of minorities in these areas. The report highlights that tensions between Kurds and Arabs over disputed territories in Kirkuk and Nineveh mean that they have become the most dangerous areas in the country in terms of security and freedom to access rights and services, particularly for minorities.

This report is intended to galvanize efforts to establish and maintain a peaceful, prosperous and inclusive society in Iraq. This can only happen if minorities are free to worship and practice their culture, live without fear of coercion, harassment or discrimination in their daily lives. Currently, they face targeted threats and violence, the destruction of their places of worship, the loss of homes and property and lack of government protection of their rights. This violence has caused significant numbers of minorities to flee Iraq, in some cases decimating communities to the point that they risk disappearing altogether from their ancient homeland. In looking for solutions, this report highlights the need to change laws and policies which discriminate against minorities; increase the availability of bilingual education; and design targeted programmes to address poverty and education gaps among minority communities.