Islamophobia and attacks on Muslims in Sri Lanka 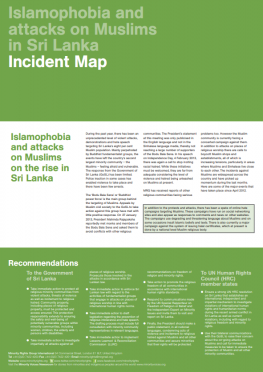 This map and short briefing presents some of the major attacks on Muslims in Sri Lanka that have taken place since April 2012.

During the past year, there has been an unprecedented level of violent attacks, demonstrations and hate speech targeting Sri Lanka’s eight per cent Muslim population. Mainly perpetrated by Buddhist fundamentalist groups, the events have left the country’s second largest minority community – the Muslims – feeling afraid and vulnerable.

The response from the Government of Sri Lanka (GoSL) has been limited. Police inaction in some cases has enabled violence to take place and there have been few arrests. The ‘Bodu Bala Sena’ or ‘Buddhist power force’ is the main group behind the targeting of Muslims. Appeals by Muslim civil society to the GoSL to take action against this group have met with little positive response. On 27 January 2013, President Mahinda Rajapaksha reportedly met monks and members of the Bodu Bala Sena and asked them to avoid conflicts with other religious communities. The President’s statement at this meeting was only publicised in the English language and not in the Sinhalese language media, thereby not reaching a large number of supporters of the Bodu Bala Sena. In his speech on Independence Day, 4 February 2013,there was again a call to stop inciting racial hatred. While these initiatives must be welcomed, they are far from adequate considering the level of violence and hatred being unleashed on Muslims at present.

MRG has received reports of other religious communities facing serious problems too. However the Muslim community is currently facing a concerted campaign against them. In addition to attacks on places of religious worship there are calls to boycott Muslim shops and establishments, all of which is increasing tensions, particularly in areas where Muslims and Sinhalese live close to each other. The incidents against Muslims are widespread across the country and have picked up momentum during the last months.